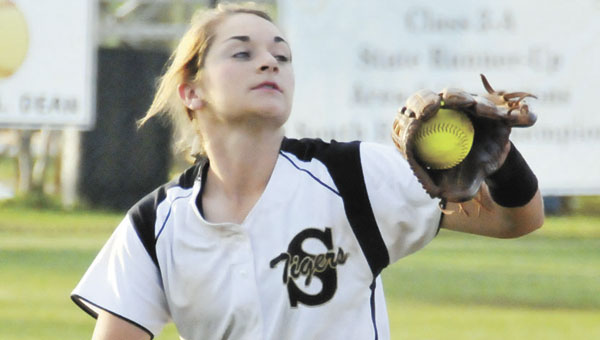 Straughn’s Molly Stewart makes a play at shortstop during the Class 3A, Area 2 tournament. | File photo

Early this season, the Straughn Lady Tigers set a goal to play in the south regional tournament in Gulf Shores.

Straughn accomplished that goal last week, and will vie for a spot to play in the state tournament, as the Lady Tigers begin their Class 3A South Regional Tournament run on Friday against W.S. Neal at 9:30 a.m. at the Gulf Shores Sports Complex.

“We knew a lot about Opp, obviously,” Taylor said. “We didn’t know a whole lot about Excel or Southside (Selma).

“With that said, I told them (Monday) that we’re not satisfied with just being there,” he said. “This is not a vacation. We’re going to play softball and play it well.”

In order to advance to the state tournament, Straughn will have to win its first three games in the winner’s bracket, or come out the winner of the loser’s bracket. There will be no regional championship game played on Saturday.

W.S. Neal played in an area where each team from top to bottom, had the same caliber talent, the coach said.

The Lady Eagles have been led by their ace pitcher, Kaitlin Hadaway, who is their only pitcher.

As far as playing at such a big venue in Gulf Shores, Taylor said it might take the girls a while to get used to their environment because they are young.

“I know there are going to be some big eyes and stuff like that being new (to the tournament),” he said. “You’ve got eight teams from six different classifications in one spot. Gulf Shores does a really good job with the tournament. It’ll be a different venue.

“Last year we were certainly infant, but now I’d like to think we are beyond that,” he said. “There have been times, I thought, where we lived up to our potential this season.”

Taylor said the team is healthy for this week’s action.

Kristen Peavey, who suffered a knee injury during last week’s area tournament, had some soreness during Monday’s practice, but Taylor said she’ll be ready to go on Friday.

Straughn’s Brooks Rabren and the rest of the Tigers feel they have a good chance to secure a state tournament... read more