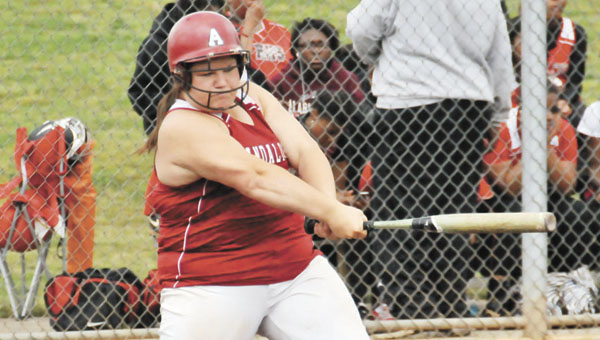 Under the mid-afternoon sun at the Dwight Mikel Sporks Complex, the Andalusia Lady Bulldogs were busy working on defense on Tuesday afternoon.

AHS is getting ready for the Class 4A South Regional Softball Tournament later this week in Gulf Shores.

The Lady Bulldogs will face Thomasville, who is a speedy and can take advantage with runners on base, on Friday at 3:30 p.m. in the tournament’s first round.

What Andalusia was working on specifically was making sure players were at the right spot on the field at the right time, Lady Bulldogs coach Brad Garner said.

“They’ve got good team speed, and they bunt and hit the ball well,” Garner said about the Lady Tigers. “I think we’ve done a lot better job with that here lately.

Garner said the girls have been hitting the ball well the past few games, and he hopes they can translate that into the regional tournament.

“If we can get some hits together with runners in scoring position, I think we stand a chance of doing pretty well,” he said.

AHS is in the same bracket with former area foe Ashford and Charles Henderson.

Luckily, Garner said the girls know what to expect if they end up facing the Lady Yellow Jackets in the second game.

Overall, the Lady Bulldogs (11-17) are excited about going to Gulf Shores this week, Garner said.

“They’re looking forward to it,” he said. “I hope we’re going down there with the attitude of we’re trying to win, and get to the next level, the state tournament. They would like to do that and want to. Also, everybody’s down there is good and that’s why they’re there.”

Straughn’s Molly Stewart makes a play at shortstop during the Class 3A, Area 2 tournament. | File photo Early this... read more