SHOOTING A MASTERFUL ROUND 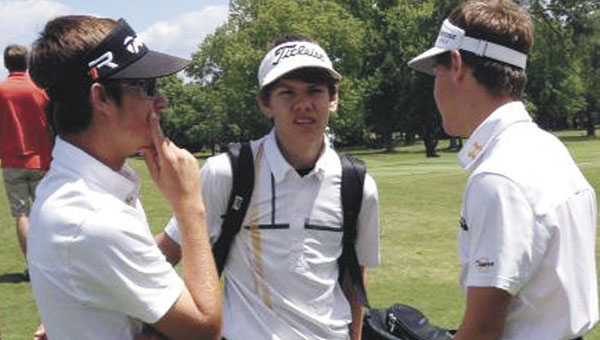 Straughn finished in second place Tuesday at the Class 3A substate tournament in Montgomery. | Courtesy photo

Straughn sophomore Brooks Rabren drained six birdies after making bogey on the first hole to card a 5-under-par 66 in the Class 3A substate golf tournament at Arrowhead Country Club in Montgomery.

The Tigers’ sophomore finished as the low medalist for the round, where SHS garnered a second place finish with a team score of 311. Bayside Academy came in first place with a 306.

After Rabren bogeyed the first hole, the SHS stand out said it helped get him focused on the task at hand.

“I just kind of thought in my head now that’s out of the way, it freed me up a lot,” Rabren said. “Everything was pretty routine out there today. Everything came naturally. I ended up playing a solid round of golf.”

With the second place finish, the Tigers qualify for the state tournament next Monday and Tuesday in Muscle Shoals.

Rabren wasn’t the only Tiger who excelled on the tough course Tuesday.

Straughn’s Austin Noland shot a 78, Keegan Compton shot a 81, Bryan Barnes had an 86 and Matt Canant had an 87.

Rabren said he was proud of how well his other teammates played Tuesday.

Straughn will be one of six teams playing for a state golf championship next week. The tournament format is 36 holes spread over two days.

Tigers golf coach Mike Kelly said the state champion has come out of either the south sectional or substate tournament in years past.

“I’ve got a bunch of sophomores and juniors who have stepped up, and I think we can be pretty good for a while,” he said.

Straughn’s Molly Stewart makes a play at shortstop during the Class 3A, Area 2 tournament. | File photo Early this... read more