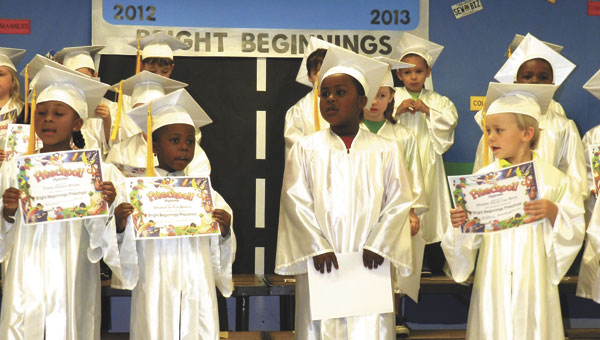 S inging “I Am a Promise” at the top of their lungs, 26 children graduated from the Andalusia Housing Authority’s Bright Beginnings pre-school program Thursday.

If they are true to the tradition of Bright Beginnings, these children indeed have plenty promise.

Martha Carter started Bright Beginnings in 1991 when she was the director of the Andalusia Housing Authority because she found that children who lived there fell behind and dropped out of school in the seventh grade.

Pre-School director Willie Thomas said he believed it was because they started school unprepared.

Since that time, he said, there have only been two graduates of Bright Beginnings who dropped out of school without graduating, and both of them quit after their mothers passed.

And of those graduates, each one who spent two years at Bright Beginnings graduated high school in the top 10 percent of his or her class.

That proud legacy was celebrated again Wednesday with a graduation theme of “Life is a Highway.”

Speaking to the audience, Thelma Thomas said, “Here at Bright Beginnings, we begin a trip,” she said.

Highways present obstacles in the form hills, mountains and curves, she said.

“But we don’t stop. We keep going on that highway,” she said. “If we don’t start that journey toward an education now, tomorrow will be too late.”

Willie Thomas had high praise for the City of Andalusia’s support of Bright Beginnings, which typically enrolls 62 students per year.

“We could not operate without the city,” Thomas said.

He said he is alarmed by daily news reports of sequestration and funding cuts to education.

“Just skip the city council,” he said. “They are doing their part. Call your state representatives and members of Congress.”

Sales taxes inside the City of Andalusia will likely increase by 1.5 percent beginning in July. The city council... read more