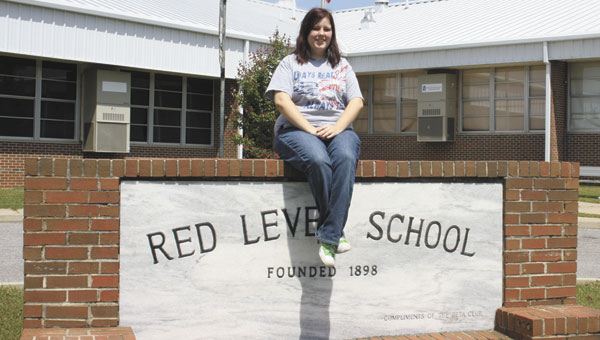 Cobb joined the program as a freshman, when then-JAG teacher Scott Donaldson invited her to become part of the program, which serves as a school-to-career program for at-risk high school youth.

During her freshman year, Cobb sat quietly watching as the seniors took a leadership role raising money for leadership conferences and the like.

As a sophomore, she helped with the organization’s “Fly a Kite for Cancer” fundraiser.

Fast forward to her senior year, and enter Tori Adams, first-year RLHS JAG instructor, who has helped Cobb blossom in many different ways.

Through a variety of different activities in the JAG program, Cobb has transformed from the shy, uncertain freshman to a leader in the organization.

With the help of Adams, who pushed Cobb to get outside her comfort zone, the senior has learned to speak publicly, talk to people, and be comfortable with being herself.

“I used to find a corner and hide,” she said. “But not anymore. It’s been a gradual thing, I’m not really sure when (the transformation) happened.”

Adams said one of the highlights along Cobb’s journey this year came during “Zombie Night” at the school.

“Miranda had written a story and she had to talk in the microphone,” she said.

Adams said the biggest thing about the JAG program isn’t the classroom experience, but the “learning by doing” aspect.

Students in the program learn employability and life skills, community service and more.

Adams said they have really focused this year on learning about business.

Students have participated in several projects in which they had to build a budget, market an event, and run it.

In the fall, they organized a haunted house that brought in $1,200 in two nights.

They learned how to deal with purchase orders through a ceiling tile project, and have continuously worked in the Red Level community, including an anti-bullying rally.

As the days disappear to graduation, Cobb said JAG has given her the confidence she needed to be herself and be successful.

“I’ve always been known as Amanda’s sister,” she said. “Now, it’s given me an identity.”

Cobb plans to get a job in order to purchase a car, and plans to enter the LBWCC therapeutic massage program.

She aspires to become a novelist, in the supernatural genre, but said she knows she needs a stable job to provide for herself.

Cobb said a draw for some students is that you don’t have to maintain a certain grade point average to be a part of the class.

S inging “I Am a Promise” at the top of their lungs, 26 children graduated from the Andalusia Housing... read more