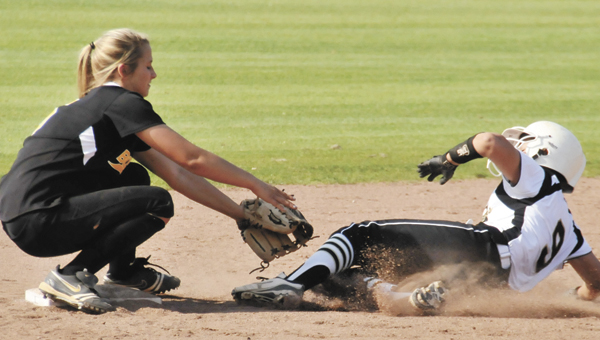 Opp’s Courtney Chatham makes the tag at second base during the Lady Bobcats’ championship run at the Class 3A, Area 2 tournament last week. The Lady Bobcats face T.R. Miller today at 8 a.m. to start their regional play in Gulf Shores. | File photo

Printed on a metal sign that hangs in Opp’s dugout has the words, “You either have got to be hungry or satisfied, you can’t be both.”

The Lady Bobcats are still hungry and will put their ferocious softball appetites into action this weekend at the Class 3A South Regional Softball Tournament in Gulf Shores.

Opp begins its tournament at 9:30 a.m. today with a first-round game against T.R. Miller in the winner’s bracket.

Unlike the Lady Bobcats, OHS coach Jimmy Reeves has been to the regional tournament before as a coach. The last time he made an appearance there was in 2010, while coaching at Pleasant Home.

Reeves said he’s been giving one piece of advice to his girls.

“Basically, just to take it one game at a time,” Reeves said. “We had a talk (Tuesday) about the fact of not letting what little accomplishments we’ve done be the end of it.”

“It’s been good for us,” he said. “We’re not satisfied. We’re going to go down there and stay hungry, and take it one game at a time.”

In order for Opp to get on a roll at the tournament, the Lady Bobcats will have to get “hot” early, Reeves said.

“Sometimes the favorites don’t make it through because it’s whatever team gets hot,” he said. “We just hope that we can hit a hot streak. We’ve been kind of peaking here lately I think. Hopefully, we’ll get down there and get off to a good start and have a good tournament.”

Getting and staying focused for the tournament hasn’t been a problem for the team, the coach said.

In fact, OHS had a great practice on Tuesday, where the Lady Bobcats displayed a tournament-like intensity on the field, Reeves said.

“The girls want it, but there are going to be eight teams who want it also,” he said. “It’s just whoever performs and executes and focuses. That’s the kinds of things we’re getting across to them.”

Lady Wildcats believe they can win at beach

Florala softball coach Pat Maddox said his girls have as good a shot as anybody to win some games at... read more