Suspect to be mentally evaluated 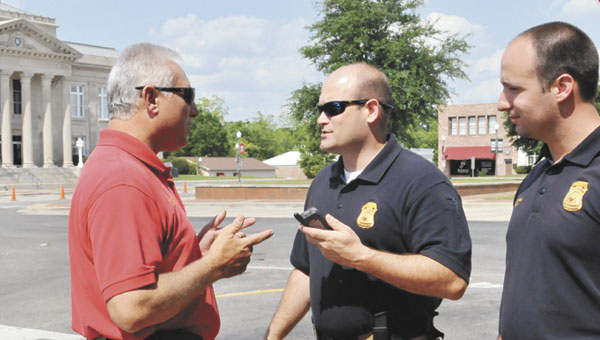 A Coffee County man believed to be at the root of Thursday’s three-county, multi-agency bomb scare that shut down government operations and schools throughout Covington County has been admitted to a hospital for evaluation.

Coffee County Chief Deputy Ronnie Whitworth said Friday that Joseph Lee Britt, 34, a resident of 2076 Co. Road 723 in Coffee County, was admitted to a hospital on Friday morning. He had been in the custody of the sheriff’s department since Thursday afternoon.

The investigation began Thursday morning when a then-unidentified person called the Covington County Probation and Paroles office and said a bomb was being made with ammonia nitrate at a specific address, and would be used to blow up a government building that day. The caller also gave the names of two people alleged to be involved and known to Pardons and Parole personnel.

Whitworth said his agency was contacted by the Covington County district attorney’s office. He said as arrangements were being made for a search warrant, the Coffee County home was put under surveillance, and contact was made with the mother of that resident.

The mother told deputies that Britt and his brother had gone to the mental health facility.

“Since that is a government building, we added security there,” Whitworth said. Meanwhile, deputies learned that Britt and his mother had been part of a domestic dispute worked by officers the previous night.

As officers began the search on the house, Whitworth said, law enforcement officers got a vehicle description and located the suspect and his brother traveling east U.S. 84 toward Dothan.

“No bomb was found,” Whitworth said, “But the dogs did alert, and the Dothan Bomb Squad was called and cleared anything there.”

The two men were transported to the Coffee County Jail as the search continued at the home.

“There was no indication a bomb had been built there,” Whitworth said. “But we did find ammonia nitrate at the scene.”

Ammonia nitrate is a fertilizer, but also is used as an oxidizing agent in homemade bombs.

Whitworth said the brother was released. No charges have been filed in Coffee County.

“Both of these men have mental issues,” Meeks said. “I won’t say that they’ve been in committed in the past, because I don’t know, but it is definite possibility. That, coupled with the fact that law enforcement didn’t find anything explosive, they won’t face criminal charges.”

Meeks said one of the men confessed to calling his claim into the Probation and Parole office located inside the Covington County Courthouse.

“I believe he believed it,” Meeks said of the man’s claim that his roommate had been stockpiling fertilizer and planned to blow up a government building. “He only gave information – two names specifically, one of which was his. He never made any threat.”

In the wake of the call, county and city buildings – including Andalusia and Covington County schools – were evacuated and later closed. Traffic was re-routed from the Court Square while bomb-sniffing dogs from Bay County, Fla., searched the courthouse.

Meeks said reactions may seem extreme, but, “As we all know, it’s better to be safe than sorry. At first, we didn’t know what we were dealing with, and while personally, I felt there was nothing to it, more information started coming in, and things changed.

“It was just easier to do the things that needed to be done to keep people safe,” he said.