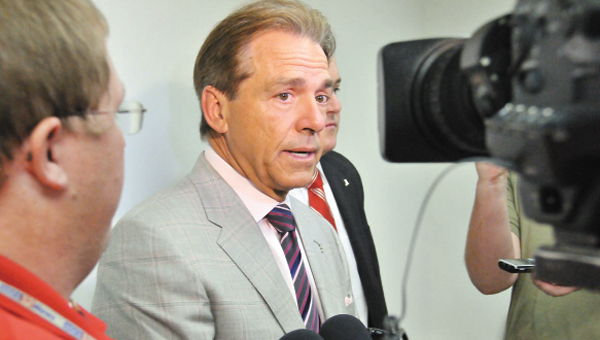 The event featured not only Saban, but also the Voice of the Crimson Tide Eli Gold, behind-the-scenes footage from last year’s championship season, and brand-new UA Athletic Director Bill Battles. All 600 seats were sold.

Saban told candid stories about his wife, the team, his coaching process, and the importance of the energy that fans bring to the game. But like the Crimson Tide team, ‘Bama fans disappointed him at the A-Day game, he said.

“Look, if we lost to Auburn, you all would be on my butt,” he said. “They had more fans that we did at their A-Day game. Now I’m the coach, and I’m getting’ on your butt.”

Saban said fan energy is important even at the spring practice game, which drew 90,000 his first year as coach, because it helps with recruiting.

The coach, who is notorious for his curt responses to the media, took a half-dozen questions from the audience. Andalusia Middle School student Callen Woodard asked the most popular question of the night.

“Coach Saban, when I go to Alabama in five years, are you still gonna be there?”

And Saban gave another answer that made the crowd happy.

“We’re not going anywhere,” he said. “Miss Terry loves Alabama, and frankly, I’m not interested in starting over anywhere else.”

He went to say that the couple has made good friends here, and that they have enjoyed their charitable work through Nick’s Kids.

SalLee Sasser Williams especially enjoyed the video tribute to and remarks made about former Athletic Director Mal Moore, a Dozier native who died this spring.

“He was a very special man, and I loved that they did that,” she said.

Rick Clifton said, “It was great to see him in Andalusia and I hope he’ll come back.”

Like most fans, Tammy Portemont, decked out in houndstooth, said, “I was smiling the whole time.”

Connie Ammons, of Geneva, said, “I thought it was very informative and I thoroughly enjoyed it.”

“I wish they would’ve given us an opportunity to get some signatures with him, or something like that,” she said. “I understand that it’s just hard to do that. The thing I enjoyed the most is that he was so comical, and very, very genuine.”

Carson Brackin, also of Geneva, got his first chance to see Saban. He said he enjoyed hearing Saban talking about Andalusia native and former Alabama linebacker Nico Johnson and how he never got in trouble. Johnson recently was drafted Kansas City Chiefs.

Ricky Brackin said he enjoyed hearing Saban talk about how focused he is on the “process.”

“Just his way of being goal-oriented to where it’s a process,” he said. “It’s just like when he gets up there and talks. What you heard from day one is the same way he talks now.

“That’s why he’s so successful because it’s a process,” he said.

“I liked what he said about hard work and dedication to the players.”

C amp Sonshine has added several new programs to its list, and is continuing with its summer program that... read more