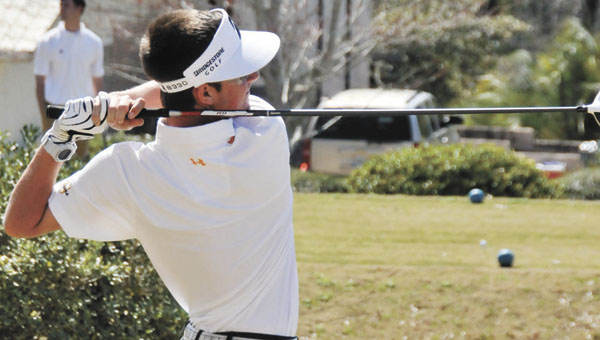 Straughn’s Brooks Rabren finished the second round of the Class 3A State Golf Tournament with a 4-under-par 68 to earn the low medalist and state title as an individual. | File photo

Smiling from ear to ear, Straughn sophomore Brooks Rabren took in what he had accomplished at the Class 3A State Golf Tournament on Tuesday.

Rabren shot a 4-under-par 68 to finish as the state champion and low medalist in 3A at The Shoals of the Robert Trent Jones Golf Trail in Muscle Shoals.

For the Tigers’ sophomore, winning a state title has been a goal for years. In fact, Rabren did so well Tuesday that he was the only golfer to shoot in the 60s in the round.

“It feels really good,” Rabren said. “This has been a goal of mine since I started on the high school golf team in seventh grade.”

Rabren was even entering Tuesday’s second round, where his tee time was set for an early 7:36 a.m.

At the start of the day, Rabren was three shots back from the individual leader.

Upon arriving at the first hole, Rabren said he thought to himself that he needed to play well.

He teed his golf ball up, and hit a perfect drive down the fairway. His approach shot landed 12 feet from the hole.

Rabren went on to make birdie on the first hole, followed that up with pars on holes 2-4, and then birdied No. 5 — a hole he bogeyed on Monday.

“I hit it dead center,” he said about his tee shot. “My approach hit the edge of the fringe and from there, I made birdie.”

After paring sixth, seventh and eighth hole, Rabren birdied No. 9 to make the turn with a 3-under-par 33.

He was one shot ahead of the leader going into the back nine.

“Then, I started pouring it on,” Rabren said.

The Straughn stand out’s only blemish of the day came on No. 11, where he said he his four poor shots.

On the 17th, Rabren said he again hit a good drive and approach shot to the green.

The last hole of the course is a long, difficult par four going up hill, Rabren said.

“I hit a decent tee shot to the edge of the rough,” he said. “Then I hit a wedge over the green.”

From the fringe, Rabren two-putted for a par and the eventual individual winning round of 68.

As a team, the Tigers shot a 319, nine shots better than Monday, for a fourth place finish.

“We want to thank Mike Kelly for helping out and volunteering with the boys this year,” SHS coach Scott Kinsaul said. “He did a great job. We had a great season.

“Getting to state was quite an accomplishment, and we hope to build on it for the next two three years,” he said.

Rabren said his only regret from the tournament and year was that the whole team didn’t finish first.

“I’m sad we couldn’t do that as a team,” he said. “That was the most important thing for me.”