Saban talks about what it means to be successful 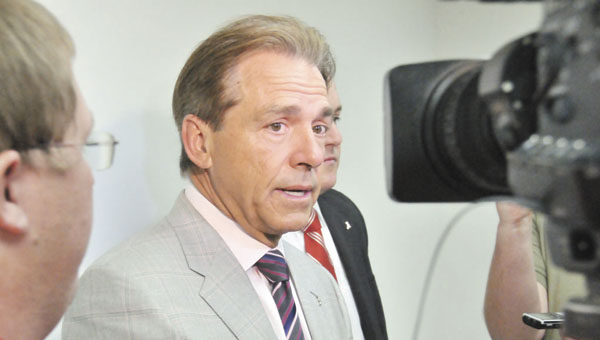 In order for the 2013 Crimson Tide to shape up and be all that it can be, the team needs to focus on what they can do to be successful.

That’s what Alabama head football coach Nick Saban told a small pool of reporters Tuesday night before the 2013 Crimson Caravan event got under way at the Kiwanis Community Building in Andalusia.

Saban and the Caravan have made stops in New York City, Birmingham, Mobile, Huntsville, Fort Payne and Andalusia on Tuesday night as a way to say thank you to the University of Alabama’s fan base.

Saban said it was good to be in Andalusia because with it, brought a couple of quality athletes.

“We’ve had great representation here with Nico Johnson and Robert Horry in the past years,” the coach said. “They’ve contributed mightily to the success of pretty good teams at Alabama. So, we’ve got some great supporters here and some great fans here, too. It’s always great to meet some and give them a little access to the program.”

Saban and the Crimson Tide are just beginning their summer workout program, which leads into fall practice.

The ‘Bama nation hopes the Crimson Tide is on the verge of winning its fourth BCS National Championship in five years.

Saban said there are a lot of things that have to fall in place for his team to accomplish the goal of winning the last BCS crystal trophy.

“I think the thing we need to focus on is what our team needs to do to be the team they can be,” he said. “Every year you have to sort of reinvent your team, as far as the roles the players have to play. This year will be no different.

“If we’re giong to be the kind of team who is going to compete with that consistency and standard, then we’re going to have to continue to develop team chemistry, positive energy and more discipline, and responsibility and accountablity, and doing things the right way,” he said.

Saban and the Crimson Caravan will next visit the Turner Field 755 Club in Atlanta tomorrow night.