Straughn’s excited about being back 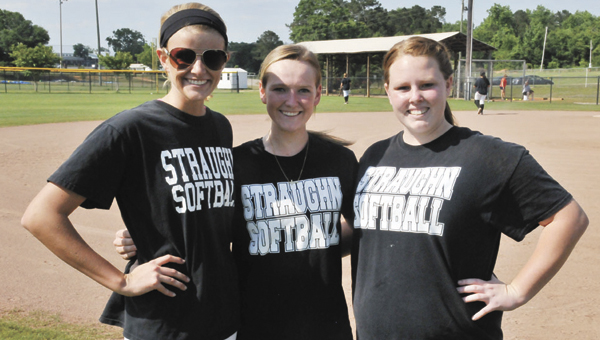 Straughn seniors (from left) Payton Mitchell, Laken Harris and Rachel Edson said they are excited about the opportunity to play at the state tournament this week. | Andrew Garner/Star-News

Taking it one game at a time, playing with excitement and staying focused.

These are just a few keys to victory Straughn’s seniors said were crucial this week as the Lady Tigers compete in the Class 3A State Softball Tournament in Montgomery, starting tomorrow.

Straughn will make its first state tournament appearance since 2011, where it was loaded with a big senior class.

With seniors Rachel Edson, Payton Mitchell and Laken Harris at the helm of the Lady Tigers’ softball team, making it back to Lagoon Park means a lot.

“I’m really excited about going back,” Mitchell said. “It just means a lot going back my senior year.”

Having three seniors who have played in the state tournament could prove helpful for such a young team as the Lady Tigers.

Edson said she’s been telling the girls about how memorable the experience is.

“It’s a fun experience, but it’s also one where it’s got to be serious and you can’t be joking around or anything like that,” she said.

The experience can also be a nerve-wracking one, Harris said.

“It’s a lot of pressure,” she said. “I’ve been telling them to just try to stay focused, play your best and try to pick yourself back up. Don’t get down on yourself.

“Because if we lose a game, we have another chance to get through the loser’s bracket,” she said.

Throughout the season, the Lady Tigers’ main theme, as with other sports, has been about belief.

The seniors said there is a team belief that really has helped propel the team forward this season.

“We’re all about being behind each other and talking each other up and being real supportive of each other,” Harris said. “Our goal was to go to Montgomery, and take each game day by day, and try to make it to the championship.”

Straughn’s Brooks Rabren finished the second round of the Class 3A State Golf Tournament with a 4-under-par 68 to earn the... read more