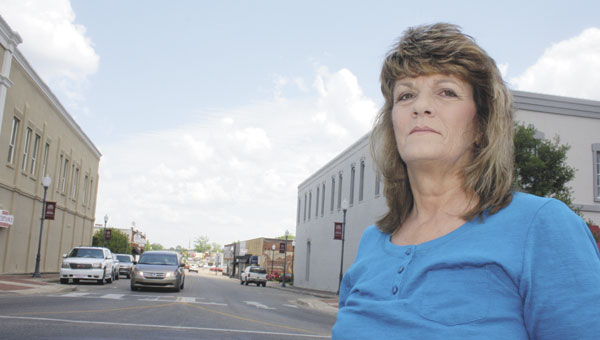 The terror Judy Murrell tasted at the hands of Raul Marino Del Torro was sickening, but the taste of victory at his attempted murder plea and two life sentences Wednesday is sweet.

Since 2011, Murrell has been the nameless victim beaten, sexually tortured and ultimately shot three times by the Cuban man in the U.S. on a work visa.

Today, she shares her story to become – in her words – a survivor.

She met the charismatic, good-looking Del Torro on Jan. 7, 2011, while out on the town.

“He talked a good game and made all kinds of promises,” Murrell said. It wasn’t long before the couple moved in together in her home on Baisden Street. A month into things, the relationship changed for the worse.

“He became so jealous,” Murrell said. “I couldn’t talk to anyone – my family or anyone. He was real possessive. He never hit me, but he grabbed me. We split up then, but he came back into town, talking that good game, and I believed him.”

On Fri., April 29, 2011, Murrell started her day as usual, finishing her workday at American Apparel in Opp and taking her then-16-year-old daughter to her father’s for the weekend. When she came home, “it all broke loose,” Murrell said.

“The day before, that Thursday, I had talked to a male friend on the phone,” she said. On Friday, “(Del Torro) said he forgave me for that. But I guess that threw him over. He had been drinking all day, judging from the beer bottles. He said, ‘I found the gun’ and he ‘guessed that I was going out that night.’”

Murrell said she knew things were about to go bad when Del Torro took her driver’s license and address book and burned them.

“From there, I’m not going to describe everything that happened,” she said, but police have given a few details. We know now that Murrell spent hours being sexually tortured and repeatedly beaten.

“The whole night, I didn’t cry at all or show any emotions to let him know he was really hurting me,” she said. “And that was hard to do every time you get hit upside the head. “He kept telling me all night he was going to kill me, going to kill me,” she said. “I begged him not to do it at home so my daughter would find me. So he took me off at gunpoint. And before I even got into the car, I knew what I was going to do or he would have killed me and they would have never found me.”

When Murrell described the actions that ultimately lead to her escape, it seems like a scene from a movie.

“I had to lay the seat back in the car, but I could tell the way we were coming off the square, and I knew, ‘It’s now or never,” and I pulled the steering wheel,” she said.

What happened after that is a blur.

“I think that was when the first shot hit,” she said. “I remember undoing my seatbelt, waving and hitting the ground. I kept telling myself, “Just breathe, Judy. Just breathe.”

A local resident getting cash from the CCB Community Bank ATM saw the crash, and ultimately the shooting, unfold. A 911 call at 7:45 a.m. that Saturday brought Covington County Sheriff’s deputy Lamar Stokes the one block from the Cost Plus parking lot. Advanced EMS was on scene within minutes.

“All of these people where in place to save Judy’s life,” said Murrell’s sister, Jan Blackmon. “We can’t say thank you enough.”

Del Torro fled from the scene behind Ashley Furniture on foot, but was ultimately located “just casually walking down the street, like he didn’t have a care in the world” hours later, Blackmon said.

“I can’t describe to you the fear we felt before he was caught, knowing he was out there with a gun,” she said. “And to know, that when they caught him, he was just casually walking around. It was unreal.”

Murrell spent two weeks in the hospital – the first week in the intensive care unit under a medically induced coma before being transferred to a regular room. The next two months were spent recovering at Blackmon’s home.

Physically, Murrell has recovered, but she will always live with the pain. Emotionally, it is a different story. She currently receives therapy once a week, and after Wednesday’s hearing, she said she is now focusing on healing.

Murrell has never seen or spoken to Del Torro – and doesn’t ever want to, she said.

“For two years, it was a roller coaster of going to trial and not going to trial,” she said. “(Wednesday) was a victory for me. I wanted that attempted murder on his record. He wanted to plea to something lesser. I said, ‘No.’ I wanted that for if he ever came up for parole.”

Blackmon said her sister “took the control back. She stuck to her guns. That day, when (District Attorney) Walt (Merrell) told her that he took the plea, you could see the relief melt over her. She said to me, ‘Now, I can start moving on. I’m not a victim. I’m a survivor.’”

Murrell and her sister encouraged anyone living in an abusive relationship to take this story to heart, and thanked family, friends, law enforcement and DA’s office staff for bringing the ordeal to an end.

“You think, ‘Oh, this stuff never happens here, or could happen to you,’” Murrell said. “’You’re wrong. It can. Look at me. I’ve got the scars to prove it. Get out of there. Help is available. Don’t stay.”