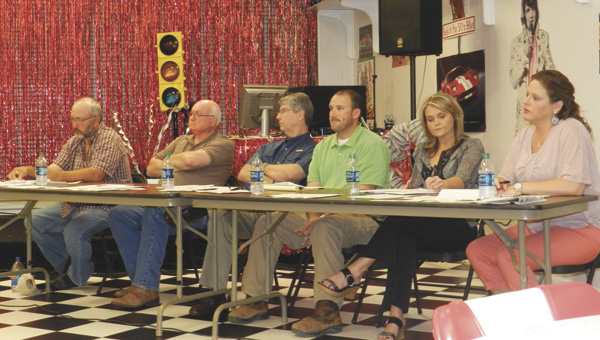 A panel of six people expressed their opposition to and concerns about a proposed sales tax increase before Andalusia Mayor Earl Johnson answered both their concerns and questions from the audience in a public meeting attended by 103 people at Harper’s Diner Monday night.

The ordinance that would increase city sales taxes in Andalusia from 2 percent to 3.5 percent was first introduced at a council meeting two weeks ago. State law requires the council to introduce or “read” an ordinance, then wait until its next meeting before passing. The council is expected to take action on the proposal tonight.

The proposed ordinance states that a third of the new tax will go to the Andalusia City School System and two-thirds will go to the city for its general use. The mayor has stated that the tax is needed in the short-term to help fund additions at the high school and elementary school, and to raise the matching funds the city needs for an $8.5 million state grant it received to rework South Three Notch Street.

Dubose, a business owner, said she felt blindsided by the tax.

“No one really understood this had been put on the agenda for a city council meeting,’ she said.

Jewell, a former member of the city council who did not seek re-election, said he doesn’t oppose a tax for schools, but proposed cuts in spending and/or the sale of city-owned real estate to generate revenue.

“My suggestion is, and I’ve talked to some council members about that, I don’t want to turn down this $8.5 million. Let’s put a limit on (the sales tax) for 18 months.”

Chris Lawrence, who opened Christopher’s in Andalusia in 1982, said he’s an Opp native who chose to live in Andalusia.

“I thought I was as close to paradise as I could possibly get,” he said. “But paradise is getting a little expensive.”

Lawrence said he, too supports a tax for schools.

“But I feel like there’s other ways to raise revenue,” he said, adding that business license fees could be increased on the service industry and professionals like doctors and lawyers.

“I love Andalusia,” Lawrence said. “It’s looking really good. A lot of t hings the mayor has done, I’ve really liked. I appreciate everything he’s done. But it’s time for the city to slow up a little bit.”

Janny McGlamory, whose family owns Harold’s, also lauded the mayor and council for the work they’ve done “in making Andalusia a beautiful place to live and raise a family.”

McGlamory said she believes a tax would affect her business.

“As a small business person in a soft market, we simply can’t take a big hit,” she said. She encouraged the city to “look for solutions before rushing headlong into a tax increase that can be detrimental.”

“I implore the city not to do this,” he said.

Marty Treadaway said he believes the city could stimulate business by “lifting the ban on some of the zoning they’ve got.”

Johnson answered a number of concerns expressed, including that people felt unaware of the tax.

“We don’t ordinarily have people attend our meetings,” he said. “But the Andalusia Star-News was there and they reported it. Our meetings are broadcast on Andy Cable.

“In addition, we record all of our council meetings and put them on our web site. I appeared the next day on another television program and that, too, is on our web site.

“We certainly have not been trying to hide anything from anyone,” he said. “I don’t know how many other ways we can put something out to pubic than ways just talked about.”

The mayor expressed his respect for the business owners present.

Johnson said his responsibility is not just the daily operation of city services, but also “to look into the future and say ‘where do we need to go, what do we need to do to meet the future.’ ”

Answering a criticism that the city has borrowed too much money, he said, “We did borrow some money, but we didn’t borrow $17 million. We did issue a $17 million bond, but that was refinanced debt and we got $5.5 million for the school system.

“The reason that worked was that we took high interest debt and paid It off with low interest debt,” he said. “We are not at our debt limit, but throughout the campain I heard from people, ‘we need to watch our debt. If’e we’re going to do this, we’ve got to pay as we go.’ ”

Johnson said the city needs the tax now to finish the work it has begun in rebuilding the city’s major thoroughfares.

He said as he was campaigning for reelection, he heard a lot of people say, “Mayor what are you gonna do about South Three Notch Street.”

The result was a grant application that was funded in a large way.

“For every $2 that the city spends, the state will spend $8 on this,” he said. “This is over a $10 million project, for one of the longest streets in Andalusia.”

He said the city can say, “no thanks” to that help; it can borrow the money; or it can raise revenue.

Additionally, he said, the schools need an additional $1.5 million for building projects about to be under way.

“Our major source of revenue is sales tax,” he said. “Everybody here has said they are for this half-cent (tax) that goes to schools.

“But every time we have put an ad valorem tax for Andalusia on the ballot, it was voted down. All of that would have gone to schools.”

Johnson argued that the proposed increase puts Andalusia’s sales tax rate at the average rate of similar cities in Alabama.

“I understand your reluctance,” he said. “People don’t shop with you, Jimmy, or you, Chris, because you have low sales tax. They do it because they want to do business with you. It’s been proven over and over again.”

Asked again and again if he would consider putting a time limit on the proposed new tax, Johnson committed more than once that “we’ll look at it” after the obligation for South Three Notch Street has been met. However, he said, the city’s infrastructure needs stretch far beyond South Three Notch.

During the question and answer period, WAAO owner Blaine Wilson, an unsuccessful candidate for mayor in 2012, went to the podium and told Johnson, “I believe you have good intentions. But this is causing our city a lot of trauma.”

Wilson later suggested that the city could raise revenue without raising taxes by putting a moratorium on all construction permits and fees to encourage construction, remodeling and additions to create jobs and stimulate the economy. He also proposed waiving the costs of water and sewerage taps, or allowing those costs to be spread over a number of years.

FEASTING AROUND THE WORLD