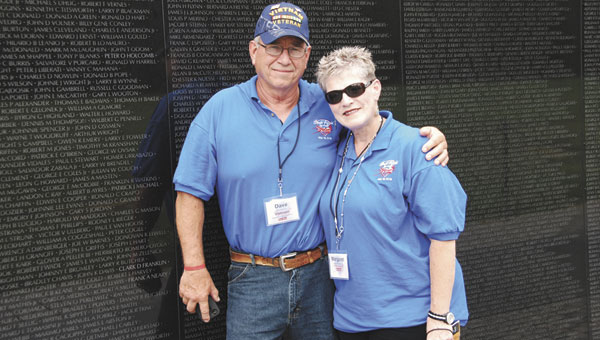 O pp Middle School Guidance Counselor Margaret Fox has always been patriotic, but a Sunday trip to Washington D.C. with local veterans was most moving for her.

Fox traveled with the Covington Region Honor Flight as a guardian with her husband, Dave, a Vietnam veteran. The couple also went in honor of their fathers, who both served in World War II.

Fox, on Monday, recalled her experience as a guardian on the trip.

“What a wonderful experience the Covington Honor Flight provided to three World War II veterans, all aged 90-plus, a few Korean veterans and several Vietnam veterans, and the guardians and family members accompanying this illustrious group,” she said.

“We traveled by bus to Birmingham where we boarded a plane for the direct flight to Baltimore-Washington International Airport,” Fox said. “The Birmingham Airport provided a patriotic tabled loaded with coffee and biscuits for our group. Travelers, airport personnel, airplane pilots and attendants also expressed their appreciation to the veterans for their service to our country.”

Fox’s favorite and most moving experience on the entire journey came as the group landed in Baltimore.

“When we got off the plane in Baltimore, applause could be heard in the jet way from the terminal,” she said. “I was brought to tears. The veterans were smiling. They were astonished. Our group was greeted with standing ovations from a departing Honor Flight, many aged vets in wheelchairs clapping for our group, as well as their other veterans and guardians.

“Other travelers in the terminal showed appreciation through applause as well as ‘thank you for your service to our country’ statements,” she said. “It was overwhelming. It left us speechless.”

From there, the group traveled by bus to Washington, D.C., where they visited the World War II, Korean and Vietnam memorials, Washington Monument, Lincoln Memorial and Air Force Memorial.

“We also stopped to see the famous stature of the raising of the flag over Iwo Jima,” she said. “We glimpsed the White House, Capitol, Pentagon and many important governmental buildings. We stopped at Arlington National Cemetery and viewed the very moving Changing of the Guard at the Tomb of the Unknown Solider.

“It was totally amazing to see in person historical landmarks and monuments that I had only seen in pictures,” Fox said. “Once again in our walking around Washington, D.C., many of our veterans were greeted with thanks from visiting tourists, appreciative of their service to our country.”

Veterans returned to Andalusia around 12:45 Monday morning, just shy of 24 hours round trip.

Veterans were given goodie bags from the Southeast Alabama Gas District and Opp Middle School filled with donated goodies and necessities from many local businesses, including Honor Flight T-shirts and a veteran hat denoting the war in which they served.

“Needless to say, had this Covington Honor Flight opportunity not been offered, these veterans, who gave many years of their lives for the United States of America and their guardians and family members, would not have had the wonderful experiences of a 24-hour day in May,” she said. “What an honor and privilege to accompany these wonderful American veterans and their guardians on such an important trip.”