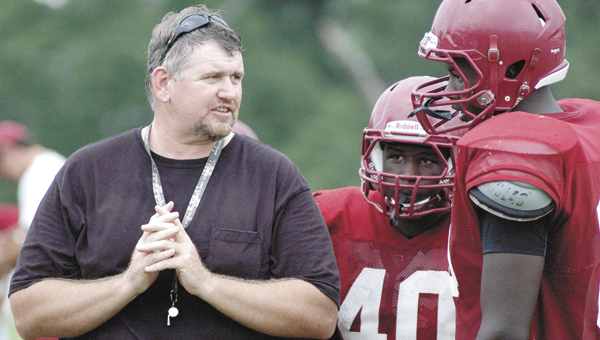 Bulldogs coach Earnie Ragland, who coached for AHS for the past three seasons and was a physical education instructor at AES, will be the new offensive line chief at Fort Gibson High School, in Fort Gibson, Okla. The Andalusia City Board of Education approved his resignation at Monday night’s meeting.

For his first two years, Ragland served as Andalusia’s defensive line coach. He made the move to offense last season when former coach Marcus Taylor left to be the head coach at Rehobeth High School, near Dothan.

Ragland, who has been traveling back and forth between Fort Gibson and Andalusia recently, said the decision to leave the community that’s given his family so much was “tough.”

“Andalusia couldn’t have been nice to me and my family,” Ragland said. “We made a lot of great friends there. It’s been a wondeful experience. People loved us so much that it made it such a togh decision for me to leave. I couldn’t have asked for anything better.”

Seymore said Ragland did a wonderful job of coaching the players, especially last season with such a young offensive line.

“He did a good job on both sides of the ball,” Seymore said. “He stepped right in there and never really missed a beat.

“The kids really responded to him,” he said. “I think that was the toughest thing when he decided to take this opportunity to go home. I think, really, you can tell our kids are definitely going to miss him. He was torn between the two places.”

Ragland said Fort Gibson is about 15 minutes away from where his mother lives, and that moving to get closer to his family played a big part in his decision to leave.

“I was so grateful for the opportunity to teach and coach there at Andalusia,” he said. “I couldn’t have asked for better kids. They bought into what I was trying to say and get through.

“The friendships I’ve made there will last a lifetime. To me, Andalusia is one of the best towns I’ve ever lived in. It was a wonderful experience.

“It’s in the process,” Seymore said. “We want to make sure we get the right fit for us in what we do here. Everybody’s got a role to play. I just want this coach to come in and take control of the offensive line, and keep moving forward.”

The Andalusia coach said the interviews are going well so far, and hope to have a new coach by the time summer workouts begin on June 10.

Seymore said there are certain criteria he looks for in an offensive line coach.

“We want a guy who is energetic, has a lot of passion for the game and is going to be really enthusiastic and push kids,” he said. “Also, we want somebody who won’t mind putting their arm around them, and love them a bit.”

With Ragland leaving, Seymore said the Bulldogs not only lost a good coach, but a good friend.

Seymore said the team is throwing Ragland a going away part tomorrow night at 6.