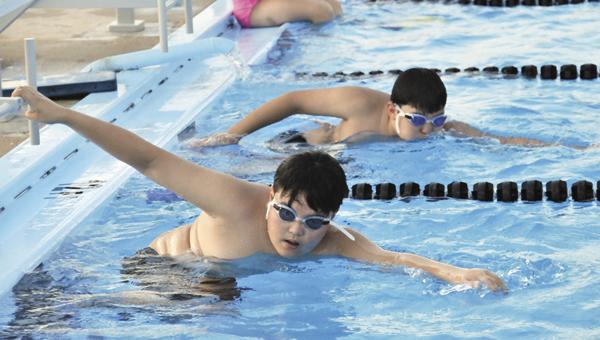 Andalusia’s Stingrays swim team is anxious, if not eager to get back in competition waters this summer.

The Stingrays have approximately 70 swimmers on the team this season.

There will be an intersquad meet on Thurs., May 30, along with three regular-season meets in June this summer for the Andalusia swim team.

The intersquad meet will help evaluate how much the swimmers are progressing in their times, 11-and-up coach Gavin Donaldson said.

“Our primary focus is to build endurance and strength,” Donaldson said. “During these meets, I’ll be evaluating and see what we need to work on, and then introduce more stroke and techniques.

“One key for them is to have the strength and endurance so they can focus on technique instead of being fatigued,” he said.

Mike Gayford, the second-year 10-and-under coach for the Stingrays, said right now the focus is on “stroke development” with the younger swimmers.

“We’re just rying to get so all of them can swim all four strokes proficiently,” Gayford said. “We had a group go to state last year. We hope to repeat that. We had some good successes. We had a relay team place third in the state for the eight and under. We hope we can repeat that again.”

To help get rid of fatigue, Donaldson said the coaches have employed a more rigorous style of workouts.

“They’re clipping off about 3,900-plus (yards) a night,” he said. “It’s not the same as it was last year. Right now, it’s one of those things I’ve learned. One of the things I keep telling the team is that you’re going to be absolutely amazed when you swim a 50 and get out, and it’s like you haven’t swam.”

Improved endurance is going to help Andalusia because two days after its intersquad meet, the Stingrays travel for their first competitive meet against Troy, Eufaula and Dothan.

Looking forward, Donaldson said he’s pleased with how much the swimmers have progressed in the water.

“I’m excited,” he said. “(Monday) was really the first night we’ve been able to run hard. The pool temp has come up to where it’s allowing us to push harder.

“I’m impressed at this point in time with where they are,” he said. “The story is yet to be told about what times they’ll swim. I’ll find that out at our intersquad meet and we’ll go from there.”