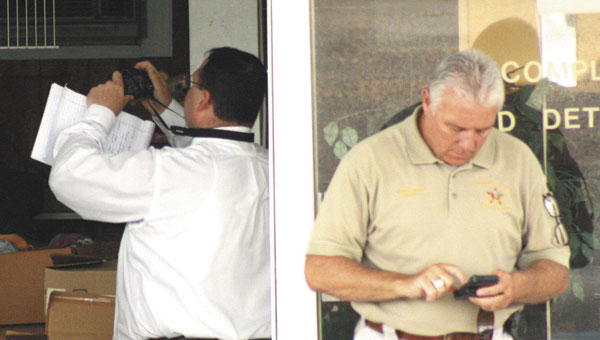 Crime scene tape surrounded the scene of the 1994 murder of James “Nibby” Barton Wednesday – giving credence to the rumor that the county’s cold case task force is actively working the 19-year-old shooting case.

For the Barton family, May 2 marked nearly two decades of not knowing who murdered and robbed the 65-year-old shopkeeper inside his U.S. Hwy. 29 convenience store that afternoon.

Since the March announcement of the new 15-member cold case task force by the Covington County District Attorney’s Office, officials have been quiet about what they’ve been investigating. Since then, a multi-agency effort was spotted using a backhoe at former home site on Pt. A Road, and still no comment was given.

Sheriff Dennis Meeks said, “What we’re doing (Wednesday) is following up on cases that are being worked. I have to start getting into (the Barton murder). It was before my time.

“But I can say in the near future, I’m hoping I can speak more as to what’s going on,” he said. “Today, we’re doing what we have to do to make that happen.”

The county DA’s office declined to comment on the day’s events; however, DA Walt Merrell said previously the task force’s “silence is an effort to maintain the integrity of the investigations and to preserve the privacy of the families involved.”

Star-News archives show that the murder occurred on May 2, 1994, and that sometime between 5 p.m. and 5:30 p.m., Barton’s wife heard a loud “bang.” By 7 p.m., when Barton had not returned home, she walked over from their home next door to the store, found him dead and called 911.

Star-News archives said law enforcement believed the murder to be robbery-connected as Barton was known to carry a large sum of cash to cash customer’s checks.

When The Star-News highlighted the Barton case in a series of stories on the county’s cold cases, retired Covington County District Attorney Investigator Porter Harris – who also investigated the case – said, “I always had a feeling inside that we were real close on the people who (murdered Barton), but we could never break it.

“I always felt bad about that. For a long time, it was all I could think about – making an arrest, I mean. I thought about it day and night. Still do, and I’ve been retired for many years. I still want it solved. I want an arrest made.”