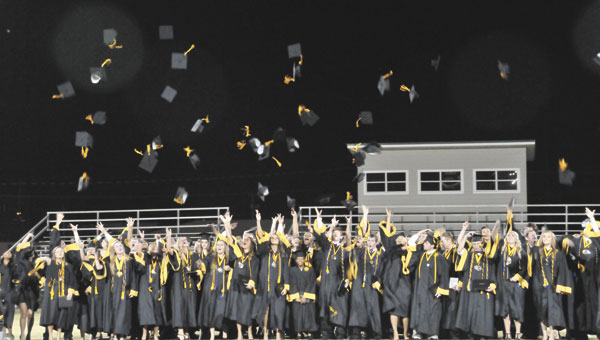 The Opp HIgh School Class of 2013 tosses their hats after graduation.

Last night, graduation ceremonies were held in each of the county schools and Opp High School, and Andalusia High School will follow suit tonight at 7 p.m.

For the last four years, students have worked hard athletically and academically to earn funds to further their education.

“Our students did very well this year,” Cauley said. “We are very proud of their accomplishments.”

LBW Community College distributed the most scholarships to students, while the University of Alabama and Auburn University were tied with 11 each.

The bulk of SHS seniors earning scholarships will be attending LBWCC, followed by Troy University and Auburn. No SHS student received a scholarship to Alabama.

In Opp, seniors were offered more than $1 million in scholarships, said guidance counselor Ronnie Sansom. A number of local organizations and businesses such as HT Hackney and Southern Independent Bank and the Rattlesnake Rodeo 5K, donated funds.

“We also had a lot of students who were awarded scholarships but turned them down,” Sansom said.

Of those awarded scholarships, the majority will be attending Troy, followed by LBWCC. UA and Auburn are tied with one scholarship each. Five students were awarded tens of thousands of dollars through the military’s GI bill, Sansom said.

Red Level seniors will share in approximately $110,000 in scholarship money, counselor Jerome Parker said. Of those students, the majority received money from Reid State Technical College followed by LBWCC. Troy University and Wallace Community College offered money to one student each, but no RLHS students earned a scholarship from Alabama or Auburn.

In Florala, students were awarded nearly $180,000 in scholarships from schools across the state, said counselor Joea McNeil. Two students will attend LBWCC on scholarship, followed by one each at the University of South Alabama, Alabama, Birmingham Southern and Enterprise State Community College.

Attempts to garner totals from Pleasant Home School were unsuccessful.

• Maggie Lambert: an Auburn University Board of Trustees

In Florala, the following students were awarded nearly $180,000 in scholarships:

Crime scene tape surrounded the scene of the 1994 murder of James “Nibby” Barton Wednesday – giving credence to the... read more