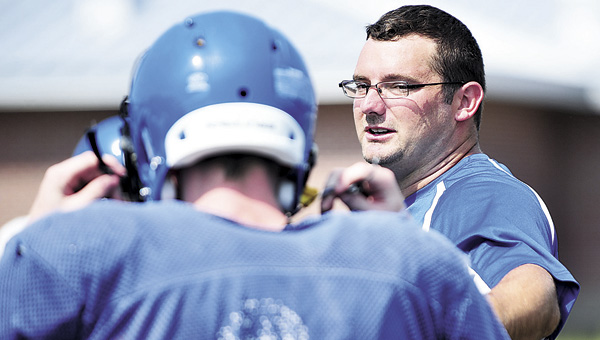 Marcus Taylor talks to a Rehobeth player during preseason practice in August. Taylor, a former Andalusia coach, was hired as an assistant at Opp. | Jay Hare/The Dothan Eagle

Marcus Taylor will be coaching in Covington County once again this fall.

“We’re very fortunate to have him on our staff,” OHS athletic director and head football coach Jack Whigham said of Taylor. “I know he’ll be a good fit. I think it speaks well of us that he is willing to give up a head coaching job and join us here.

“He’s got a lot of class, and is a good Christian young man — a stable and hard worker,” he said.

Taylor led Rehobeth to a 1-9 season in 2012, where two of the losses were by seven or less points, according to The Dothan Eagle. RHS put together a 2-8 season before Taylor arrived last year.

Taylor told the The Dothan Eagle that he felt like the program wasn’t “going where it needed to be going.”

“I feel it is time for me to turn it over to someone else to get it going in the right direction,” Taylor said.

Frankie Clark was named the interim coach at Rehobeth.

In other coaching news, the board approved OHS assistant coach Will Cammack’s resignation at Thursday’s meeting.

“He did a very good job of teaching the athletes,” Whigham said about Cammack. “He did a great job with them, and we wish him well.”

Cammack said he is interviewing for positions at Geneva County, New Brockton and Excel.