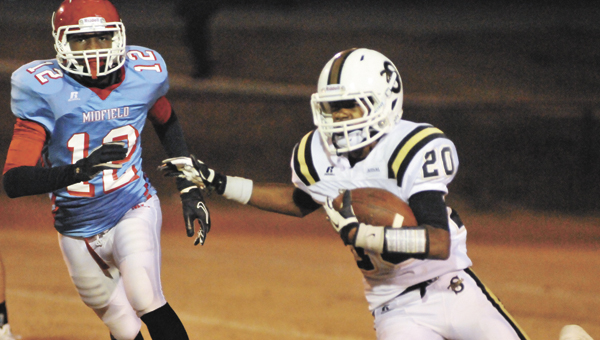 Straughn’s Daryl George (20) runs down the field during the third round of the Class 3A state playoffs in November. The Tigers will play Walter Wellborn Aug. 24 in the 2013 Champions Challenge. | File photo

Straughn head football coach Trent Taylor was a little surprised when the school got a call from the Alabama High School Athletic Association asking whether they’d like to play in the 2013 Champions Challenge in August.

The Tigers just wrapped up a 10-4 season, where they played in the Class 3A state semifinals against Fayette County.

The call from the AHSAA came right before the school let out for the Christmas holidays, Taylor said.

“They just asked (SHS principal) Mr. (Shannon) Driver if we were interested and he talked to me about it,” the coach said.

Right when the spring semester began, the AHSAA called to confirm that Straughn would be playing in the preseason game.

Taylor said the team didn’t know who it would play until about a month later.

“Toward the end of February, we found out we were going to play Walter Wellborn,” he said.

Straughn will play Walter Wellborn on Sat., Aug. 24, at 5 p.m. at the Cramton Bowl in Montgomery in the eighth annual preseason two-day event.

The other four teams participating in the event are Walker, Benjamin Russell, Bob Jones and Enterprise.

Teams are chosen by the Alabama High School Athletic Directors and Coaches Association (AHSADCA). Originally, the state champions from the previous year were chosen, but it’s changed to teams who are projected to have a strong team the next year representing different parts of the state.

The match up will be a sort of reunion for Taylor.

Taylor, who played football at Andalusia High School, was on the Bulldogs’ 1977 state championship team when they beat Walter Wellborn, 7-0. Walter Wellborn’s coach, Jeff Smith, played for the Panthers in the same game.

“That’s going to be kind of neat for me,” Taylor said.

Originally, Straughn was slated to play Red Level in its preseason game.

Taylor said this game will give the players a great opportunity to play on a big stage.

“Our kids are excited and we’re excited,” he said. “I’m not a big fall jamboree or spring game kind of guy, but the one thing that it does help is that once again this year we don’t have a week 10. So, we’ll approach this as our opening game.”

However, a down side to the game is that Straughn will be playing the first of three road games back to back, Taylor said.

“It’ll be interesting to see how we respond to that,” he said.

Florala youth football players compete in a game last season. The Florala YES program is a feeder program for the... read more