‘Listen to the voices of the dead’

Col. (Ret.) Clyde Northrop called upon Americans to “listen to the voices of the dead” whose voices and experiences encourage the living to “keep the liberties for which we fought and died.”

Standing before the obelisk that bears the names of the county’s war dead, Northrop said, “Those listed on this monument join a great crowd of witnesses,” he said.

“It will never be enough to lay the wreaths, fire the weapons and play the taps,” Northrop said. “Those whose names are carved in granite speak by their heroic actions and perseverance. Their experience ought never be silenced.

“Hear them as they thunder, ‘Keep the liberties for which we fought and died. Honor our faith by the way you live.’ ”

Northrop recounted his own military experiences around the world.

“When I joined the military in 1954, I was issued an Eisenhower jacket,” he said. “I entered a unit replacing a deactivating unit from Korea.

“Thirty-four years later in Korea, I ministered to soldiers still under nightly live fire,” he said. “Today we face a new generation of the same lying tyrant.” 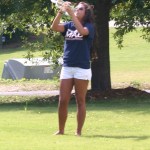 He spoke of standing in the European and Pacific theaters and viewing row after row of white crosses; of being in Dachau.

“Go stand in Dachau … and try to do so without sensing the starvation and smelling the burning flesh,” he said. “We heard the dead scream there.”

He said the world still abounds with tyrants and would-be tyrants.

“I absolutely believe that the greatest tyrant we face today is the one that wants to make slaves of our daughters, hide even their faces, steal their car keys, mutilate their sexual organs, and rfuse them an education.

“Women, help me sound the alarm! I can hear our brave dead shouting and our media elite scorning any who would attempt to speak the truth.”

Northrop used the words of Washington and Kennedy, but closed with Lincoln’s words at Gettysburg.

“We highly resolve that these dead shall not have died in vain – that this nation, under God, shall have a new birth of freedom – and that government of the people, by the people, for the people, shall not perish from the earth.”

Northrop said, “We have a great heritage. Pass I on to our children. Let no one attempt to silence it.”