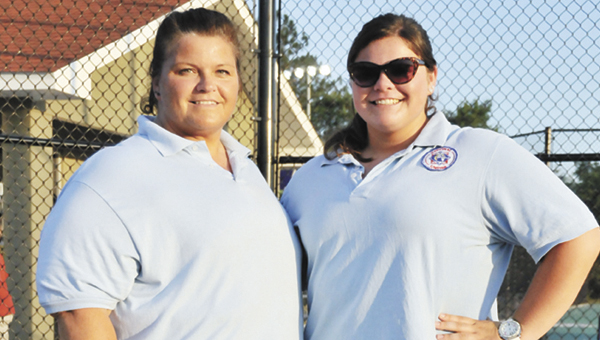 Kat and Katie Hollinghead can honestly say they leave everything on the field.

The mother-daughter duo have been calling strikes, balls and batters out for five years at rec-league softball games with the City of Andalusia.

Katie, the daughter, has been officiating for three years, while Kat has been an umpire for two years.

“It’s fun,” Kat said. “We know each other, and we don’t have to worry about what we say. We have fun with each other.”

For Katie, umpiring softball is a natural fit. She played the sport for years.

“I do it because I like to do it,” she said. “I like helping little kids figure out how to play the game.”

Softball has been a big part of the Hollinghead family.

David, Kat’s husband, is the city’s umpire in charge. He was a few umpires short this season and asked both of them to volunteer.

“Everybody likes to complain about the umpiring, but nobody will volunteer to do it,” Kat said. “He was super short-handed this year, and he asked me to do it.”

The most fun part about being an umpire is helping the kids, Kat said.

While parents tend to argue about plays on the field, the mother and daughter team admit that they do have fun arguments at home.

California natives, the Hollingheads moved to Opp 15 years ago.

Katie will be a freshman at the University of Alabama in the fall, and said she might umpire while in school.

“I’m not entirely sure,” she said. “It mght be a little intense.”

Additionally, Kat said she might be called to officiate the upcoming state tournament that’s being held here later this summer.