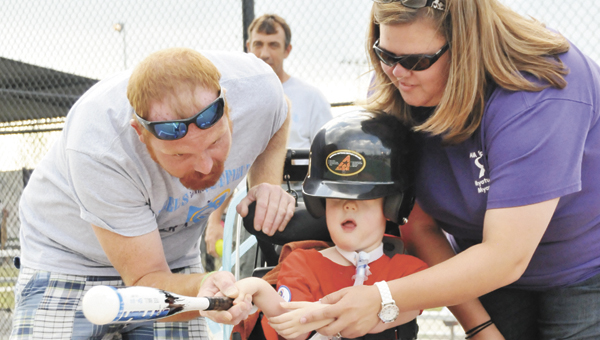 Baker plays on the Angels baseball team in the Covington County Miracle League, where participants with special needs play their brand of baseball at Johnson Park.

The league had its opening day on April 30 and both teams were introduced to the fans in attendance.

Emily and Derek had been waiting five years to hear their son’s name over the loud speaker.

“For us, it’s like our dream has (come true) — what we envisioned for him was coming true,” Emily said.

When the first time the announcer called Baker’s name, Emily said she shed some tears.

For the past six weeks, Baker has joined his fellow Angels teammates to play the game they love so much.

Every game, each player’s name is called.

Emily said it never gets old to hear Baker’s name.

“He loves it,” she said. “If you look at him and smile and clap, he’ll like it even better. He likes some attention being all up on him.”

Fortunately, the disorder doesn’t get worse and with therapy, it can get better.

“Stuff like this is great (for Baker),” Emily said. “A swing of the bat, throwing of the ball — that’s all great for him.”

On a frequent basis, Baker has to visit Children’s Hospital in Birmingham, Emily said.

The staff of the pulmonary unit at the hospital said a league such as the CCML would be good for Baker.

Emily said the family was “pretty excited” when they found out that there was going to be a Miracle League in Covington County.

“They said he would love it,” she said. “When we found out about it, we were pretty excited.”

Emily said the real treat for her is not only watching Baker compete in the field, but watching the other players go at it as well.

“Watching all of them does our heart good,” she said.

The league itself is important for the players because it gives them something to do with others who have needs, Emily said.

“I think it’s good to always let the fans see the diversity that there is a need in Covington County,” Emily said. “I can think of other children who are out there that aren’t here. The need is always great.”

Alexis Horton is in for a busy summer. The former Andalusia stand out and current Pensacola State College Pirate women’s... read more