Roby: Much work needs to be done soon 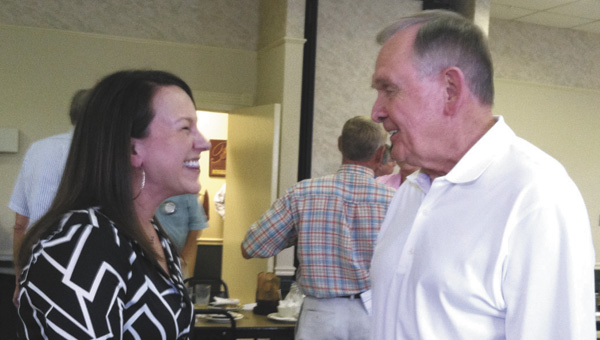 Rep. Martha Roby (R-Montgomery) said Congress has much work to be done in the weeks before the August break if it wants to avoid 11th hour budgeting.

Speaking to the Andalusia Rotary Club during Congress’s district work week break, Roby explained that if she and her colleagues don’t work through appropriations bills, Congress keeps government operating with a continuing resolution, which extends and existing budget, or with an omnibus bill that takes all appropriations together.

Asked specifically if Congress could “defund” an agency or government official with which it wasn’t happy, Roby said it would be difficult because of the way that budgets have been handled in recent years.

“Technically, you could defund that line item, but then you would have to get it passed in the Senate,” she said. “It depends upon whether it is part of the omnibus or continuing resolution or the appropriations process.

“We can, but whether it ends up in what’s put in place at the 11th hour before the government shuts down, it probably is not a reality,” she said.

House members recently “marked up” a proposed reauthorization of the farm bill, she said.

“We defunded the ability that if you qualify for energy assistance, you are not automatically enrolled in food stamps,” she said. “You can still qualify, but it is a separate process. Because we did that, we saved billions of dollars.”

Most of the nutrition programs in the farm bill are mandatory spending, she said, and have nothing to do with farming.

When government is funded with an omnibus bill, she said, “it’s thousands of pages, who knows what’s in it, and it’s just a bad way to do business.”

• Was asked about efforts to secure a government contract for American Apparel, which was underbid by less than one percent recently for a government uniform contract, and subsequently laid off 225 workers in Opp. Roby said ethics rules prevent members of Congress from intervening in the process.

• Asked about gunrights, Roby said, “I am a gun owner and a strong supporter of the Second Amendment. ”

Reference the school shootings in Connecticut, she said, “When something like that happens, our instincts tell us to do something. Lawmakers think, ‘we need to go pass a law.’ It’s a reactionary thing.

“I don’t think we need any more laws. We need to deal with enforcing the laws we already have,” she said.

• As chairman of the House Armed Services Subcommittee on Oversight and Investigations, Roby said she recently sat through five hours of classified briefings on Benghazi.

“Because it is classified, there is only so much I can say,” she said. “But the investigation is ongoing, from the defense standpoint, dealing with the timeline and assets.

“I know that the American lives that were lost is of deep concern to those in this room,” she said. “You have my commitment to get to the bottom of it, and it is a huge responsibility.”

Andalusia’s Will Parker is among Alabama’s 69 National Merit Scholarship winners. The son of Joe and Candy Parker, he graduated... read more