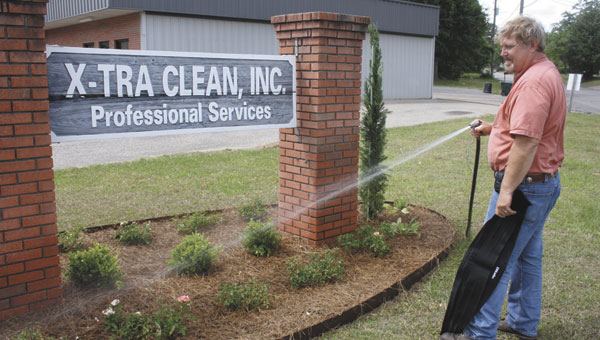 Bobby Taylor waters the flowers outside X-tra Clean Inc., on Thursday. While the Opp and Covington County Water systems have asked customers to conserve water, the Andalusia system has no shortage of water at the present.

The requests stem from two pump failures in the Covington County Water Authority’s system, and since the system is drawing water from the City of Opp system, residents in each supply area are being asked to conserve water.

Randy Ward, CCWA manager, said mechanical problems at the system’s Onycha pump and the Boykin pump are expected to last two to three weeks. The Boykin pump covers the northern part of the county near Red Level and services customers in the Boykin, Garden, Brooks and South communities. The Onycha pump services customers in that community, Horn Hill, U.S. Hwy. 331 south and down through Red Oak.

“We have six deep wells in different parts of the county, eight storage tanks and 800 miles of water mains in the county,” Ward said. “As far as underground aquifers go, which is where the water comes from, they’re all OK. There is plenty of water to pump, if the pumps would pump it.”

Ward said the system is being supplemented with water from the cities of Opp and Andalusia and Butler County.

“Opp was kind enough to help us out in the Onycha area,” he said. “But, (city officials) said we’re starting to pull them down. The pumps are running long and it’s putting a strain on the system.

“We’re asking our 4,000-plus customers to please conserve water,” he said. “We have other connections with other systems, but they’re all pumping to stay ahead of overall water demand. That’s the problem. We’re looking for people to cut back and conserve until we can get the mechanical problems corrected.”

“They’ve explained they are working daily on repairs and they anticipate having repairs,” Parker said. “In an effort to build our reserve back up to capacity, we would ask our customers to follow a house number odd/even watering schedule. This is mandatory but should only last through the month of June or until we receive substantial rainfall.”

Odd number addresses are asked to water on Monday, Wednesday and Friday; even on Tuesday, Thursday and Saturday. There is to be no watering on Sunday.

In Andalusia, there is currently no water restriction.

For the love of yarn — New store opens downtown Andy

Stitches are just in Louise Walker’s blood. The former travel nurse is the owner of Pale Moon Yarns –... read more