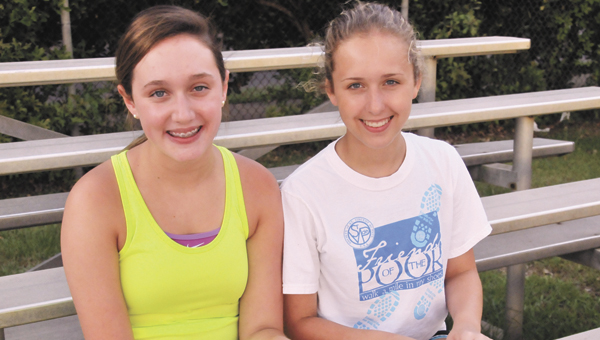 Without hesitation, Mary Beth Baker and Cali Fillmer dive in the water and through the lanes with ease at Tuesday night’s practice.

Baker and Fillmer and the rest of the Andalusia Stingrays were busy getting ready for today’s first competitive swim meet of the summer in Troy. The Stingrays will swim against Eufaula, Dothan and Troy.

Baker and Fillmer, who are two of the older swimmers on the team, said prior experience on the team will help them be effective leaders this summer.

“They already know what we’re talking about,” Baker said about the younger swimmers. “We’ve been swimming for a while, so it probably helps with that.

“We swim all year round, and I think they look up to us for that,” she said.

This will be Baker’s seventh year of swimming, and Fillmer’s eighth.

For the past year, both have been taking on year-round swimming.

Fillmer said the year-round program was an opportunity that she and Baker couldn’t pass up.

At the same time, both said “a lot” when asked how much they love swimming.

Fillmer joked that instead of hanging out with friends, she instead, would rather be swimming.

Baker and Fillmer’s paths to the pool were different.

Baker’s mom, Danielle, saw an article in the news about swimming and thought it would be fun for Mary Beth, while for Fillmer, former Stingrays coach Barbara Peek convinced her to come on board.

When asked why they like swimming, the girls said that it’s a sport that anyone can participate in.

While many different swimmers participate in different strokes during competition, the girls said they have their favorites.

“Butterfly and freestyle for me,” Fillmer said.

Both said they want to win district this year and bring home some awards from state.

“We’re hoping that we do really well at district and state, and that everybody beats their times,” Fillmer said.

Baker and Fillmer will be entering the ninth grade at Opp and Andalusia High Schools, respectively.

Cool water temperatures haven’t kept the Stingrays from preparing for today’s meet in Troy. Above, this teen was in the... read more