Angels on the field 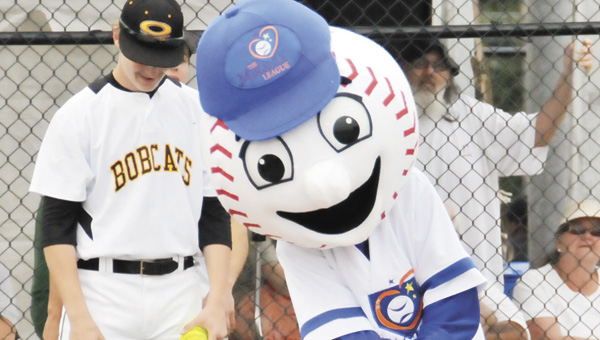 Homer gets a hit during the opening game of the Covington County Miracle League season April 30. | File photo

While it may get hot in her mascot suit every Tuesday, Kathryn Zeh said there’s nothing like seeing the smiles on the Covington County Miracle League players’ faces.

Zeh, who has suited up each week to play “Homer,” the league’s mascot, said her experience this season has been “incredible.”

“I love seeing the kids every Tuesday and watching them play baseball,” she said. “Just the smiles they have on their faces — it’s probably the best feeling in the world.”

Zeh added that she found it a blessing to be the mascot.

“I high five them and run the bases with them sometimes,” she said. “They love Homer. They’re just so full of love in general. They’re like amazing gifts from God.

“None of them let their disabilities stand in their way,” she said. “It’s truly a blessing, and I’m so glad I got to do it.”

Zeh, a New York native who is attending nursing school at LBWCC, said she became the mascot through her boyfriend, Seth Wilson’s, mom (Patty Wilcox) and sister (Kelli Wilcox), who are both league buddies.

In the outfield, the Miracle League has a group of volunteers called “buddies,” or “angels,” who help each player run the bases, field balls hit in the field and swing the bat at the plate.

Kennedy Smith, who is the granddaughter of the late Durrell “Duke” Smith — one of the league’s organizers — said being a buddy for these players is “priceless.”

“It was fun working with them,” she said. “That was the best thing for me to work with the Miracle League. I’ll always continue to do that.”

The most rewarding aspect of their jobs is seeing the players’ faces and how happy they are during each game, both said.

“I love people in general,” Zeh said. “I’m a compassionate and caring and kind person. Just to see how the coaches and kids interact with each other — that’s something you wouldn’t normally see in a world that is so torn apart. They don’t realize what’s happening in the world right now.

“They know they’re happy playing baseball, and I know I’m happy watching them play,” she said.

Zeh and Smith will have one last go as the league’s mascot and buddy tonight when the season comes to a close at Johnson Park.

Smith and Zeh said they’d be OK with volunteering with the league next season.