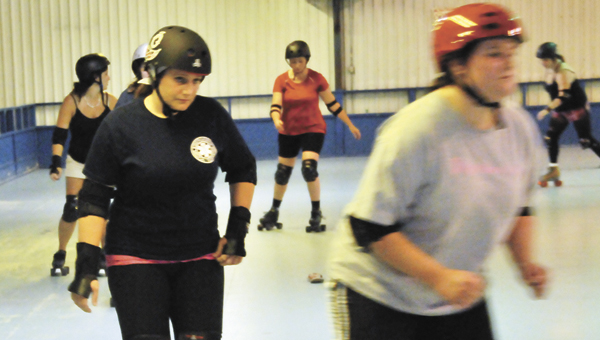 As if on cue, members of the Sweet Home Wreckers crash to the floor knee-first at Opp’s Skate Rink on Saturday morning, but one shouldn’t be alarmed. This is a normal practice drill for the newly-formed roller derby team.

The Sweet Home Wreckers have been practicing on skates on Saturday mornings from 9 a.m. until about 11 a.m., and undergoing off skate fitness at Robinson Park on Mondays and Wednesdays.

Opp resident Jessica Cobb, who was leading the practice in coach Jama Jenkins’ absence Saturday, said the team has to meet a minimum skill set in six months in order to be able to compete in a derby league.

In fact, the team will also have to pass a written test in order to roll into competition in the future, Cobb said.

The normal roller derby season lasts from March until November. The off season is from December until February.

The Saturday morning practices will be held every week until the regular season ends.

Even though the team has a long way to go, Cobb said every one treats each other as if they were family.

“It’s a sisterhood,” she said.