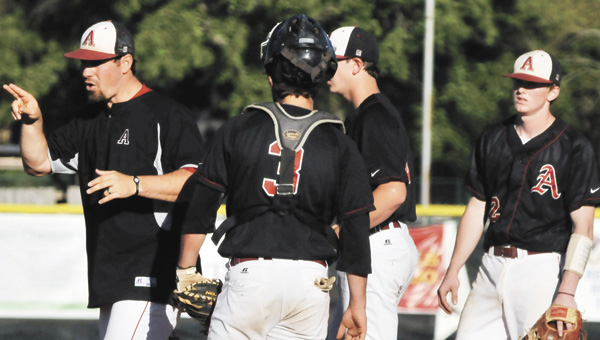 Jonathan Rasberry wanted to go back home to Dothan, and that’s what the Andalusia coach said Tuesday as he resigned from his posts as special education teacher and head baseball coach.

Rasberry, who led the Bulldogs to a record-breaking season in 2013, was hired yesterday by the Dothan City Schools Board of Education as a special education teacher and assistant baseball coach at Class 6A Northview High School.

Going back to Dothan will be a homecoming for the former Andalusia coach, he said.

Rasberry said the opportunity to coach at NHS was just right.

“I have a 7-month-old daughter (Kayleigh),” he said. “She has her grandparents who are there to help and support us. As far as me and my career, and my wife and my family, it was a really good move for us at this point in our lives.”

In his five years as the Bulldogs’ head baseball coach, Rasberry compiled a 92-70-1 record. He helped lead Andalusia to a record-breaking 28-10-1 season this year. Additionally, he was an assistant football coach at AHS.

Rasberry said the decision was made more difficult by what he had coming back next season, if he returned next season.

“I’ve had these kids for — this will be my fourth year coming up — with my junior group,” he said. “I’ve been here for five years, and I felt like we were starting to hit our stride as a baseball program.

“As well as a year we had this past year, and returning everybody back, I was looking forward to next year,” he said. “But, in the same sense, I needed to do what was right for me and my family at the right time, and I always said as a head coach that I’d leave a program better than what I got it. I think there’s no doubt that I’m leaving it in better shape than what I got it.”

Rasberry said he’s going to miss Andalusia, where he said he’s made some life-long friends.

“We’ll never forget Andalusia,” Rasberry said. “We’re very appreciative off of the people here in Andalusia. I thank the administration for hiring me and giving me the opportunity to teach and coach here.”

A new coach is expected to be hired at Andalusia City Schools’ next board meeting on Mon., June 17.

SNBF to pump up Andalusia again