SNBF to pump up Andalusia again 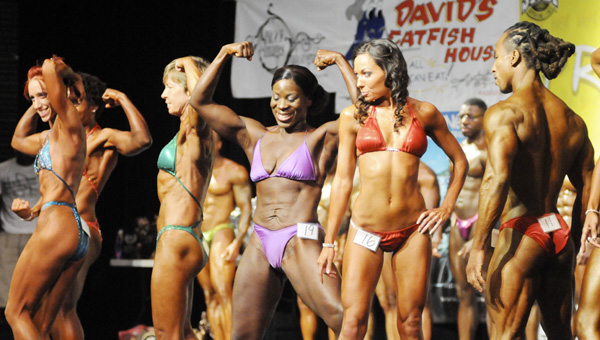 Men and women show off their stuff in front of judges during last year’s event. | File photo

Katlin Jones and Jamie Wright will strut their stuff at the Alabama Supernatural Bodybuilding and Fitness (SNBF) Pro and Amateur Event on Saturday at LBWCC’s Martha and Solon Dixon Center for the Performing Arts.

Jones of Red Level, and Wright of River Falls, will participate in the event, which is making its second debut in Andalusia. The SNBF held its first competition in Andalusia last year.

Additionally, SNBF is drug free, meaning that each competitor is drug tested through a urinalysis and polygraph.

Wright is competing in the men’s physique category. He placed second in the category at the Atlanta State Championship in April.

In the men’s physique category, the competitors need to have a softer and smooth detailed look, said Robert Johnson, who owns Robert’s Body Shop and Family Fitness in Andalusia.

The women’s bikini category is the same thing, Johnson said.

“It’s all about the soft look,” he said.

Jones will compete for her first time in the women’s bikini portion of the event.

She admitted that she’s a bit nervous going into Saturday’s event.

“Just a little,” Jones said. “I’m actually learning a lot. I didn’t realize all that this incorporated with certain exercises, and having to eat right and everything else.”

Jones said Johnson is a big reason why she’s competing in the event.

“I’ve never done anything like this,” she said. “So, I decided to go ahead and give it a shot.”

Getting ready for this event takes time and a lot of dedication, the locals said.

“It takes a lot of hard work and dedication and the will power to work,” Wright said.

“He’s the best in the business,” Wright said about Johnson.

Jones agreed with what Wright said about Johnson.

“It takes a whole lot of will power to not be able to grab anything and be able to eat it,” she said. “With my training and working at Shaw has been a kick in the butt. Robert knows what he’s doing. He’s an awesome coach.”