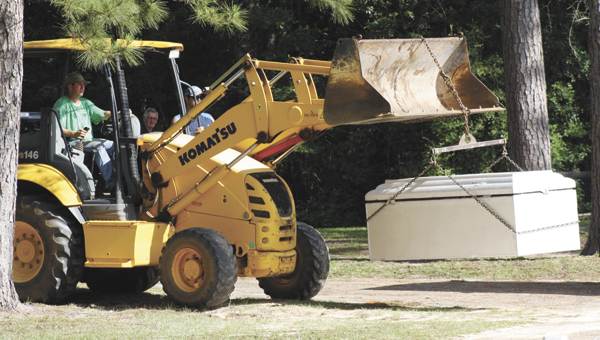 The body of a Gantt man – identified as a suspect in an ongoing cold case murder investigation –was exhumed Wednesday.

“The cause of the accident is unknown at this time,” the story reported.

A lot remains unknown about Dean; however, when asked by The Star-News that if police knew what is known now about Dean’s criminal involvement, would he be considered a murder suspect, District Attorney Walt Merrell said, “Yes.”

Merrell said that the task force not only obtained consent for the exhumation from Dean’s biological children, but the group also obtained a court order for the proceedings.

As investigators worked, one was observed removing items from Dean’s casket and placing them into a brown paper sack. Merrell would not confirm what those items were.

“I can confirm that we came here looking for a certain thing, and that thing was recovered,” Merrell said. “I’m satisfied with the outcome (of things). I have no doubt that it will be productive and fruitful in the prosecution of the case that we are working on.”

Merrell said there could be multiple arrests coming in the future; however, he would never specify which case the task force was working.

“I don’t think we’re out here wasting our time,” Merrell said. “But I will say it’s an unsolved homicide.”

The dig was the first venture of its kind in memory for law enforcement, and at the end of the day, Dean’s body was laid to rest in a new vault. Merrell said the evidence recovered from the site was submitted to the state department of forensic science for testing.

On exhuming Dean’s body, one family member at the scene, who asked to remain un-named, said, “This was something that had to be done. It was the right thing to do.”

Merrell said the task force is now one step closer to providing one family closure, and that the group is currently working three cold case homicides.

“We’re working more than one case, but I’m not Babe Ruth, and I can’t predict a home run, but this cold case task force is so good, so professional, so thorough, that when it’s all said and done, the citizens of Covington County will never question why we did things this way.

“I would say this about the families of these victims, they deserve closure,” he said. “(About) the suspects, there’s only one way to get the burden off their chests that they’ve been carrying all these years, and justice tends to be more merciful when there is remorse.”

Merrell said investigators are being tight-lipped about Dean’s connection to a cold case, as well as other cases, because “we are attempting to keep a lid on rumors.”

“Investigating a cold case is exhaustive,” he said. “We want information from the public. We want help from the public, but at the same time, we don’t want to chase rumors. We have found already in this investigation that because of the tight-lipped approach, when we get information, it tends to be credible.”

The dig was the third public venture by the county’s cold case task force.

Several weeks ago, investigators excavated and searched a former home site off Point A Road where sources say Dean once lived.

And while the task force has attempted to control rumors about the investigation, public speculation is that new leads have been exposed in the 19-year-old murder case of Heath store owner James “Nibby” Barton.

Barton was found shot inside the store in 1994.

A few weeks ago, investigators used GPS mapping equipment at the crime scene and were seen removing an office box of items from inside the store.

Star-News archives show that Barton’s murder occurred on May 2, 1994. Barton’s wife discovered his body that evening when he didn’t return home after closing the store.

Star-News archives said law enforcement believed the murder to be robbery-connected as Barton was known to carry a large sum of cash to cash customer’s checks.