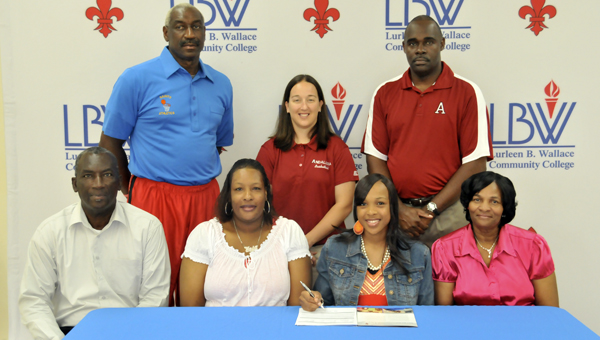 The Andalusia graduate signed a basketball scholarship to LBWCC Thursday morning and credited AHS principal Dr. Daniel Shakespeare and Bulldogs basketball coach Richard Robertson for helping her get to play at the next level.

Malcolm said she also was considering going to Alabama State University in Montgomery to play ball.

“I just really thank them and (AHS girls basketball coach Teresa) Herring for allowing me to be able to play here,” she said. “I really wanted to play basketball here and do all of my basics.”

In early May, Malcolm came and worked out in front of LBWCC women’s coach Ricky Knight.

The Lady Saints coach said what attracted him to want to recruit Malcolm was her size and play-making ability.

“She had good size and I thought that maybe she could play a three or four for us,” Knight said. “We’re going to try to let her face the baskets. She can shoot it from the outside a little bit from what we could see. She had some quickness, and size made everything.

“So, we decided that we’d sign her and try and let her face the basket some,” he said. “We’re just glad to have her. I think she’ll be an asset to our program and will help us win some games.”

Malcolm is the daughter of Pamela Curry of Andalusia.