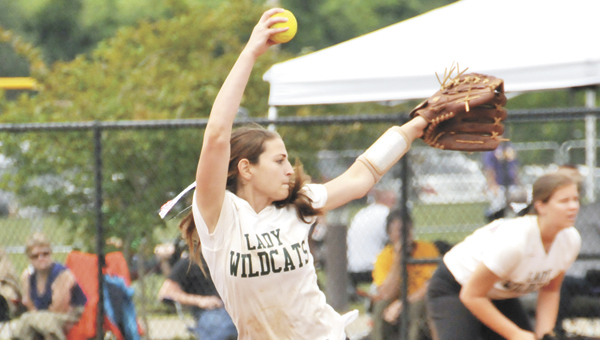 Florala freshman Lily Ritzel struck out 309 batters in her 37 games in 2013. The rising sophomore said it’s her mission to raise the level of competition at FHS. Ritzel is shown here pitching at the Class 1A South Regional Softball Tournament in Gulf Shores in May. | Andrew Garner/Star-News

Lily Ritzel knows what it’s like to play at a high level of competition.

The Florala freshman utilized a hard work ethic and her previous experience to garner 309 strikeouts this season.

Ritzel’s strikeout count was good enough to be selected to the first team of the 2013 Alabama Sports Writers Association Class 1A All-State Softball Team at pitcher.

What enabled Ritzel to average more than eight strikeouts per game this year was a healthy dose of hard work, she said.

“I just practiced a lot,” she said. “I went to pitching lessons and I was on a travel softball team to get better at playing softball.”

Shortly after falling in the loser’s bracket of the 2012 South Regional Tournament, Ritzel said she got right back to work for the 2013 season.

Her mind set this season was focused only on improving as a player and helping the Lady Wildcats go farther in the playoffs.

In fact, FHS finished one round better in the regional tournament than in 2012.

Helping Florala improve this season was a big motivation tool in her success, Ritzel said.

“I just like helping my team out,” she said. “I like helping them with hitting. I’m not always the greatest hitter, but I like going out to the mound (more) and that’s what I really focused on, is pitching.”

Ritzel has been playing softball since she was 5 years old.

The Oviedo, Fla., native, who moved to Florala two years ago this October, played rec ball and was soon on a travel ball club at 8 years old. She then played as an All-Star for six years.

In 2010, Ritzel got a good taste of what it’s like to play at a higher level at the Babe Ruth Softball 12U World Series in Gainesville, Fla., where here Oviedo team finished in sixth place.

At that tournament, Ritzel won the Gold Glove Award for most strikeouts and the Best Defensive Player Award.

Fast forward to 2011, Oviedo played in the 2011 Babe Ruth Softball 12U World Series in Andalusia, and went on to beat Lodi, Calif., to claim the title. Half of her travel ball team were on the Oviedo club that won the Andalusia tournament.

With all of this experience as a youngster playing the sport she loves, Ritzel said it’s her mission to bring Florala up to the level of competition she knows so well.

At 309 strikeouts this season, that’s a good start.

Lily is the daughter of Laron Ritzel of Florala, and Clete Ritzel, of Oviedo, Fla.

Paige Taylor of Straughn, and Laiken Free of Opp, were selected as honorable mentions on the Class 3A team.