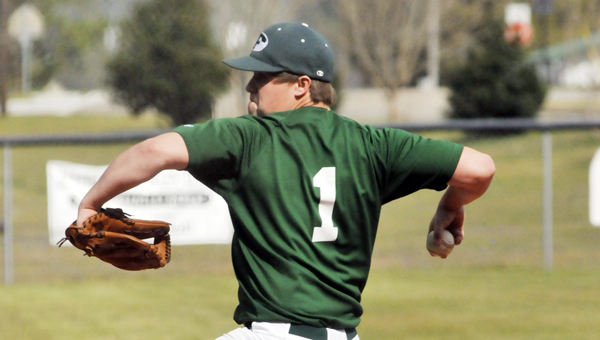 Made out of plywood, John Bess’s pitcher’s mound was just right for his offseason preparation.

From mid-September of 2012 after he was dismissed from Florala’s football team, Bess decided to dedicate himself to the only sport he feels he can play real well — baseball.

Bess’s work and dedication led to him having a monster season for the Wildcats, leading them to the second round of the Class 1A state playoffs.

Bess struck out 132 batters in 86 innings and finished with a WHIP of 0.42 and a record of 9-3 to solidify a spot on the first team of the 2013 Alabama Sports Writers Association Class 1A All-State Baseball Team, which was released today.

During his stellar season, Bess tirelessly threw pitch after pitch until there were no more batters to face.

When asked how he managed to display a “never give up” attitude this year, Bess gave credit where it was due.

“Really, it helps when you have a defense behind you who’s going to make those plays,” he said.

While he may have been dominant on the mound, there were times where Bess had to get out of some jams.

At those critical times, Bess said he prayed to get through them.

Despite from being dismissed from the football team in mid September for an undisclosed reason, Bess said it gave him more time to focus on the sport he loves the most — baseball.

“I came out after my whole football scenario and I put a lot of work in this year toward baseball,” Bess said. “Coming into baseball season, I knew I was ready. There was no doubt in my mind, that I was going to come out and do my best.”

In fact, he started pitching on the piece of plywood his father, Alvin, built a week after the football “controversy,” the senior said.

“It was a good way to kind of release some of the anger and everything,” he said. “It was a nice release.”

Throughout his workouts and preparation, Bess said he stretched and threw constantly during this time period.

Florala ended up getting beat by Brantley 2-1 in the best of three series in the second round of the playoffs.

“I’d like to think we started out good,” he said. “I’m proud I was part of one of the teams that made it this far.”

When asked why he likes the sport he’s played ever since he could enroll in it, Bess didn’t really know what to say.

“That’s a hard question,” Bess said. “It’s just something about it. It could be because it’s my best sport, but really, I couldn’t tell you why I like it. I could do it everyday.”

Next spring, Bess will play baseball for the Saints at LBWCC.

John is the son of Alvin Bess and Tammy Suggs of Florala.

Opp pitcher Ethan Davis was selected as an honorable mention on the Class 3A team.

Andalusia first baseman Quinton Maddox was also selected as an honorable mention on the Class 4A team.

Teen fights off man with knife

Wants others to know it’s  possible, ‘even if you’re little’ Layden Lee is a fighter, and she’s got the knife... read more