Andalusians were witnesses to historic ‘Stand’ at UA

Fifty years ago today, Alabama was thrust into the national spotlight when then Gov. George Wallace “stood in the schoolhouse door” in a futile attempt to stop the University of Alabama from enrolling two African American students, Vivian Malone and James Hood. 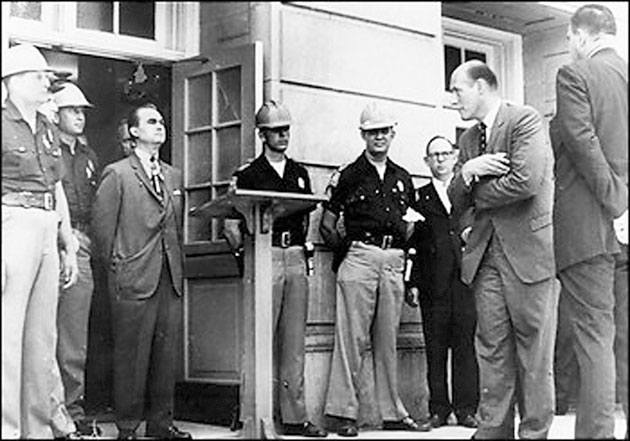 Attorney General Robert Kennedy authorized sending the National Guard to remove Wallace. In the face of these officers, Wallace complied and stepped aside from the auditorium doorway. Malone and Hood enrolled without further incident.

Margo Russell was a student at UA that summer.

“Of course I remember it,” she said. “Regina worked for the news bureau and she drug me everywhere.”

Russell was speaking of her then-roommate, Andalusia native Regina Brogden Wright, who went on to a successful career as a journalist. She now lives in Decatur, but Monday, she reflected on that day.

“Tom and I both worked for the (University’s) news bureau,” she said. “They assigned him to be on the outside, I was in the inside of Foster Auditorium with the press pool.”

“I think the thing that I remember the most was Foster Auditorium was set up just like it would be if hundreds of people were registering that day,” Wright recalled. “The professors who were registering had told everybody no matter what, to keep your seat.

“All of a sudden a group of state troopers burst through the front door, positioning selves around Foster Auditorium,” she laughed. “The professors jumped and ran.”

The press, she said, never moved.

Although the event was historic and in some ways tense, she recalled that it was a boring day.

Because she worked with the news bureau, she said, she always thought it was going to be a staged thing. Students weren’t afraid, she said, of that event.

“Most people were worried about the Klan.”

Robert Shelton, then grand wizard of United Klans of America (UKA), lived in Tuscaloosa at the time, and many were concerned not about what would happen that day, but what the Klan might do at night.

“It was aggravating because we couldn’t get Coca-Colas on campus,” Wright said, adding that the bottles might have been used as weapons.

Later, Wright was assigned by the news bureau to follow Vivian Malone, while the man who would become her husband, Tom Wright, was assigned to follow Jimmy Hood.

Regina Wright said because it was her job to follow Malone, her photograph appeared in news bureau photos all over the world.

News bureau photographs went around the world. I was walking with Ms. Malone, and my picture was in every newspaper all over the world.

“Everywhere she went, it was like the president of the United States was going somewhere,” she said, recalling the photographers and security that surrounded Malone on campus.

Even with the heightened attention on the campus, Wright said, students grew accustomed to bomb threats and other drama.

“I don’t remember students being afraid,” she said. “Not even the night they set the dynamite off.”

A National Guard officer who had been assigned to Tuscaloosa set off the dynamite because he didn’t want to go home, she said.

And while the event made national news, it wasn’t a top priority for students, Wright said.

Hood transferred to another university shortly afterward, but Malone remained and became the first African-American student to earn a degree from UA in 1965.

The University will mark the anniversary of the event with a program in Foster Auditorium tonight.

A special website, www.throughthedoors.ua.edu, launched in February, is devoted to the anniversary.

Rain good for some, bad for others

Recent rains are a “double-edged sword,” but there is a break on the horizon as forecasts predict clear skies and... read more