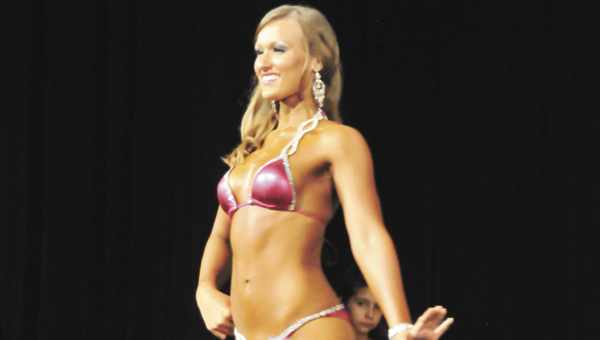 Cassie Cooper didn’t need a trophy from this weekend’s state bodybuilding and fitness event to know she’s a winner.

The numbers on the scale prove it every time the rising Andalusia senior steps on.

Cooper, the daughter of Renee and Scott Cooper of Andalusia, made a decision as a rising sixth grader to slim down and shape up.

Now 190 pounds lighter and having devoted a considerable amount of time working out and dieting, Cooper got the chance to show her hard work off Saturday night in a “life-changing experience” at the Alabama SNBF Pro and Amateur Event.

The second-year event, held at LBWCC’s Martha and Solon Dixon Center for the Performing Arts, included 40 competitors vying for a first place finish in their respective category.

Each participant had to be drug free entering the SNBF event, which also handed out pro cards to contestants.

Cooper, who was the youngest competitor at 16, was one of two locals participating in the amateur bikini category. The other, Katlin Jones, finished in fourth place.

“It was a very life-changing experience,” Cooper said. “Also, even though I didn’t place, it gives me more motivation to do another event.

“This gave me more experience and I want everybody that can to try it,” she said.

This was Cooper and Jones’ first event for the SNBF.

Cooper said she wanted to compete in the SNBF after a workout buddy — Mandy Wiggins, who competed in last year’s event — talked her into doing the show.

A big part of each competitor’s preparation for a bodybuilding and fitness show is their diet and workout regimen.

Cooper said she’s been dieting for the last four and a half to five months.

“The first couple of months aren’t terrible, but the last two months, we had to cut down on a lot. We couldn’t eat anything with salt,” she said.

The workouts were strenuous, Cooper said.

“We go from using heavy weights to less reps, then go from less weight to more reps,” she said. “All the while in the gym every day for an hour to an hour and a half, seven days a week.”

Normally after such an event, competitors will chow down on food that they’ve not been able to eat prior to the show.

Cooper’s food of choice was sour patch kids candy, and she said they tasted great.

Cassie is the daughter of Renee and Scott Cooper of Andalusia.

Additionally, David Johnson of Lockhart, who was in his first event in 25 years, finished first in the men’s masters category and received his SNBF pro card.