No need to panic over frogs 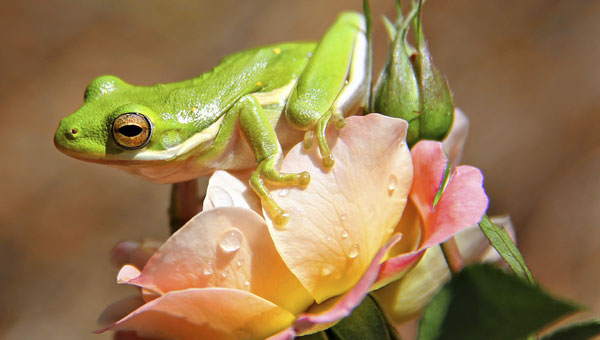 Thousands of toads and frogs appearing on roadways or in backyards may conjure up end of the world scenes to some, but there is no need to panic. These small animals produce thousands of offspring at a time, yet only a few ever reach adulthood. Any mass appearance of baby frogs or toads is merely a coincidence and completely natural.

In the state of Alabama, one may encounter 31 varieties of frogs and toads. While the terms “frog” and “toad” have no scientific distinction, we usually refer to toads as the bumpy-skinned frogs that hop and are commonly encountered around homes and gardens. American, Fowler’s, Southern, and oak toad are the four toads found in Alabama. The other frogs in the state belong to five different frog families. These usually smooth-skinned leapers include the well-known bullfrog and green treefrog.

Frogs are generally viewed favorably by the public with few complaints phoned into the district wildlife offices, but there are a few. The most common complaint is the unwanted appearance of frogs clinging to windows and walls at night outside of front doors or on back porches. Though totally harmless, the very thought of the possibility of a frog jumping onto your person is paralyzing to some.

The most likely culprits clinging to walls at eye level are the green treefrog or squirrel treefrog. These two small amphibians, 2 inches or less, make nightly appearances around front and back porches only to dine on insects attracted to outdoor lights. Using their toe pads to cling to vertical surfaces, including glass, the treefrogs scamper about eating insects at night and retreating to shaded hiding places during the day.

Toads lack toe pads and cannot cling to vertical surfaces like treefrogs. They are also often seen outside your door waiting for the insects attracted to light streaming from the house.

On rarer occasions you may encounter dozens, hundreds, or even thousands of tiny toads hopping in your yard. This scene is caused by a simultaneous mass emergence of young toads from the water where they hatched and transformed from tadpole to juvenile frog. While the numbers can be amazing, keep in mind that only a few ever reach adulthood.

Frogs on walls or tiny toads hopping about should be of little concern as remedies are not practical or necessary. You can’t really keep your house dark all of the time and eliminating all the water near your property is not realistic, nor would it be necessarily desirable.

Another frog invasion of a sort is the man-made variety. This is the establishment and often nuisance of introduced frog species. In more instances than not, the introduction of a new species to an area, be it plant or animal, has unwanted consequences—think kudzu and fire ant in Alabama. Introduced frogs are no exception. A classic example is the cane toad.

Introduced to Australia in the 1930s to control cane beetles, the 4- to 5-inch cane toad faces no natural predators or other control and has greatly expanded its range in the eastern portions of the country. Populations of small animals that are eaten by the large toad have been decimated and predators are killed by the toxins within the skin glands of the toad.

The cane toad, along with the Cuban treefrog, Puerto Rican coqui, and greenhouse frog are now exotic species established in Florida. In Alabama, the greenhouse frog is found in the warm, moist environments of coastal Mobile and Baldwin counties. The long-term consequences of these invaders to Florida and Alabama may be negligible, but the best and safest policy is to never allow them in, and that goes for just about any foreign species.

Roger Clay is a wildlife biologist, Alabama Division of Wildlife and Freshwater Fisheries.