Rates at, above average 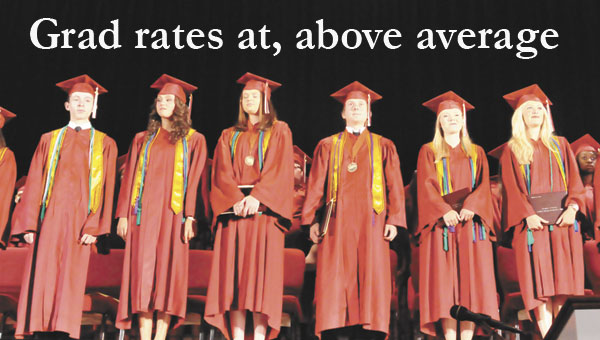 The 2012 high school graduation rates of the six high schools in Covington County were at or above the state average, save one.

The Alabama State Department of Education released the rates earlier this week. For the first time, the rates were calculated using a new formula adopted at the urging of the National Governors’ Association designed to make reporting more uniform.

The graduation rate is now calculated on the basis of a four-year cohort, explained Opp Superintendent Michael Smithart.

“When a group of freshmen enter, the graduation rate is the percentage of those students who graduate with a diploma in four years,” he said. “Without exception.”

Smithart said the method is the most widely used across the nation.

Most of the state’s systems, he said, had a significant decrease from the 2011 rate to the 2012 rate because of the changes in the formula.

Opp High School, which graduated 91 students in 2012, had a graduation rate of 84 percent.

“We no longer count students who receive a GED,” Smithart said. “In addition, with significant mental or physical disabilities which prevent them from participation in the regular curriculum count against a system. Three of our students fell into this category. That alone represents a four-point swing in our calculation. That change alone would push us to 88 percent.

The system had seven students drop out of that freshman class over the four-year period.

“I have to say that those students were basically transient students who moved in for a short period of time, but they count,” he said. “We had four students who moved out of the area and we were not able to locate them. They also count against a system.”

Even with the changes in reporting, Andalusia High School’s rate, at 75 percent, was improved.

“We are pleased to report a 4 percent increase,” Superintendent Ted Watson said. “Obviously, we’re not where we want to be, because we’d like to be at 100 percent.”

“Our rate has improved two years in a row,” Watson said. “I take great delight in these small steps forward.”

Systems can do nothing about some of the factors that affect the graduation rate, outgoing Covington County Superintendent Terry Holley said. Overall, the county system’s graduation rate in 2012 was 81 percent.

“We just have to adapt to it,” he said. “Sometimes when students move, we can’t find them, and that affects us.”

But Holley said he is encouraged that more students will be interested in remaining in school, thanks to some of the changes put in place since Dr. Tommy Bice took over as state superintendent.

“He has encouraged us to think outside the box, and implement things that will help our system locally,” Holley said. “Going to the ACT as opposed to the graduation exam will help. And new career tech programs will be good for some students, too. A lot of things are changing.”

Smithart said the entire Opp school system has been focused on the effort to improve the graduation rate, and he is pleased with that effort.

“Most people view graduation rates as a reflection of a high school, but it more systemic than that,” Smithart said. “It truly takes every teacher, k-12, to improve graduation rates. It’s not where we want it yet, but it’s better than it was and headed in the right direction.”