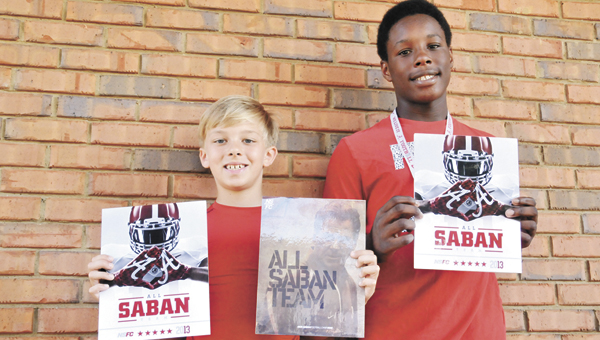 Gage Messick (left) and Ke’Shun Townsend pose for a photo with their Nick Saban Football Camp programs and stat sheets on how they did on the gridiron. | Andrew Garner/Star-News

Gage Messick and Ke’Shun Townsend had both a fun and hard time this week at the Nick Saban Football Camp in Tuscaloosa.

From Sunday until Wednesday, the Andalusia athletes participated in drills to improve their performance on the gridiron.

Messick and Townsend did so well at the camp that they were selected to the All-Saban Team for their efforts.

“It was fun and hard at the same time,” Townsend said.

Each camp day was filled with almost 12 hours of workouts from 8:30 a.m. until 8 that night.

This was Messick’s second time to go to the camp. He focused on the running back position at this year’s camp. In 2012, he learned more about being a quarterback.

There wasn’t a difference between the two years at the camp, Messick said.

While at the camp, Messick and Townsend went through two tests to measure their agility on the field.

Townsend signed up for the camp to play at outside linebacker, but was instead moved to another position.

“They didn’t have enough people (in the outside linebacker group),” he said. “So, they worked me in at safety and cornerback.”

Saban’s camp taught the Andalusia duo a lot about proper stances, not committing false starts, how to pick up speed and foot work. Additionally, campers got to have a picture with Saban.

Messick’s father, Russell, said he learned about the camp when former Alabama and current Kansas City linebacker Nico Johnson gave him a brochure with information. From there, he went online and signed Gage up.

Sometimes the booster club needs a little boost – and that’s why the Florala club is asking area residents to... read more