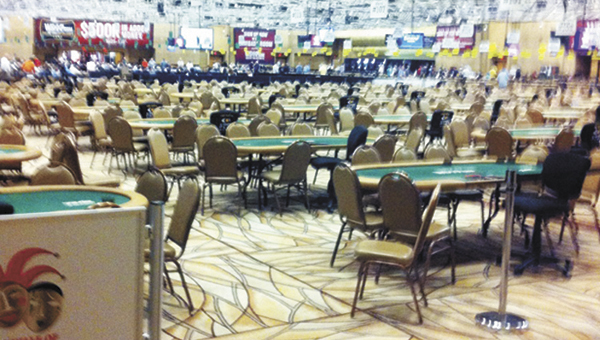 Shown here is one of the rooms Stephen Darby played No-Limit Hold’em in the 44th annual World Series of Poker at the Rio in Las Vegas. | Courtesy photo

Stephen Darby can honestly say he was playing with the pros.

Professionals of poker that is.

Darby, an Andalusia native, finished 187th out of 2,108 in event No. 30 of No-Limit Hold’em in the 44th annual World Series of Poker at the Rio in Las Vegas.

The event is one of several held during the year that leads to the WSOP’s main event, which is usually held in the fall.

Darby competed with some of the best poker players in the land on Sunday and Monday. He played 12 hours of straight poker with a 20-minute break every two hours. After the first six hours, the competitors had a nine-minute dinner break and topped that off with the additional five hours.

Darby said the experience playing in the event is something he’ll never forget.

“It was awesome,” he said on the telephone. “This has been something I’ve waned to do ever since 2003, when Chris Moneymaker won (the WSOP main event).

“I was entranced by poker,” he said. “That’s all I wanted to do then.”

Darby, now 22 years old, decided when he turned 21 that he’d go out to Las Vegas and play in the WSOP.

“I entered this one and made day two,” he said. “(The experience) was way more than I could’ve ever expected.

“Winning money is always a plus,” he quipped, “but I beat almost 2,000 other people. I never really though of myself as that great. I was playing with some well-known pros.”

Darby said he had to text a few of his friends some professional’s names to see if they were legit. One player even let him watch the U.S. Open, a major tournament in the golfing world, on his iPad.

“There were a lot better players there,” he said. “I was kind of fortunate to get some decent cards.”

In no-limit hold’em, the dealer deals out two cards each to the players present at the table. Players are free to make a bet based on what they are holding.

When the first round of betting is complete and players decide play what they have, the dealer will put out three cards face up, also known as the flop. After another round of betting, checking or raising the pot value, the dealer turns over the fourth card, or the turn. The process repeats until the fifth card, or what is called the river, is turned over. Then, the hand is over and players see their fate.

Darby said he went “all in” about four times. On one hand, he had a four-of-a-kind and won.

On the three other tries, Darby had pocket aces, had a 10-8 flop with pocket jacks, but hit an ace on the turn; and at the tail end, he had a short stack and pushed all in and fell while holding an Ace-Nine.

Darby was one of 216 players who actually earned money from the tournament. He said he had to wait until the 217th player to get knocked out. It was pretty nerve-wracking, he said.

“He didn’t leave with any money,” Darby said.

After a long first day of competition, Darby entered the second day (Monday) and was knocked out about 30 minutes into the round. The event concludes today.

Darby will be graduating from Auburn University in May with a political science and economics degree, along with a minor in psychology. He is the son David and Laura Darby of Andalusia.

7 locals to compete at national rodeo in July