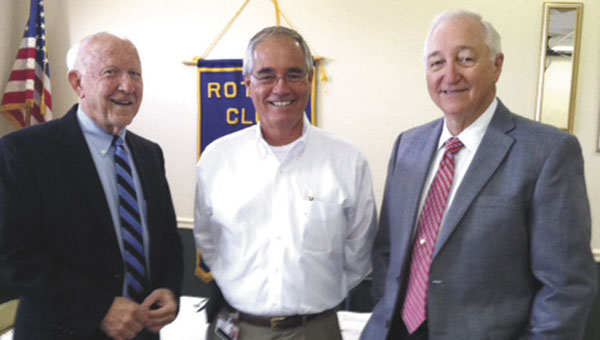 The realization that there aren’t enough primary care physicians in the nation or the state – and that the problem is going to get worse – led a group in Alabama to take matters into their own hands.

Through the Alabama Medical Education Consortium (AMEC), students from 10 medical schools across the country come to rural Alabama for clinical training, with the overall goal of recruiting physicians to choose primary care careers in medically underserved communities. Andalusia Regional Hospital is one of the sites at which this training is provided, Dr. Jimmy Adkisson of Brewton, a member of AMEC, told Rotarians Tuesday.

Further, he said, AMEC’s work led to the idea of Alabama developing its own College of Osteopathic Medicine (ACOM).

Several colleges and communities expressed an interest in the college, but Houston County came up with the money to make it a reality. As a result, the Alabama College of Osteopathic Medicine will open this August with 162 students, and will be affiliated with Southeast Alabama Medical Center.

But as those students reach their third year of study, they’ll be sent to do rounds in places like Andalusia.

“This is the core of medicine,” he said. “These kinds of doctors take care of 90 percent of health care needs.”

Of the 67 counties in Alabama, 65 don’t have enough doctors, and 60 actually have a shortage.

Armed with data that most physicians practice within 100 miles of where they study, that’s were AMEC comes into play.

“We envisioned a medical school without walls,” Adkisson said. “If we send students into rural America, they are more likely to come back to practice here.”

Currently, AMEC has 600 physicians in Alabama committed to accepting third and fourth-year medical students to study with them.

“Would you give up living in Andalusia to live in Birmingham or Huntsville?” Adkisson asked. “No. Guest what? The reverse is true, also. They don’t understand us.”

“Her critique if ARH was excellent,” Adkisson said.

The new medical school will mean that happens more often.

“Students will actually do their internships here,” he said. “This will impact Andalusia tremendously.”

Only 1 school in region ‘fails’

There’s only one school in Covington County’s neighborhood on the list of 78 “failing” schools released yesterday. The state released... read more