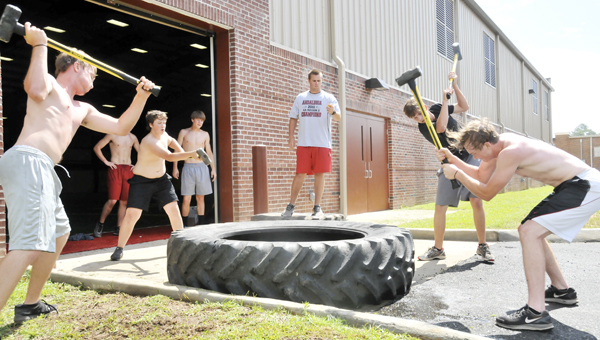 Tyler Dent made it his goal to come back to this area and be a coach.

Dent accomplished his goal when he became Andalusia High School’s new head baseball coach after the city board of education approved his hire on Monday night.

Dent, a Harris County, Ga. native, played ball at LBWCC during the 2009 and 2010 seasons at pitcher. After his successful stint for the Saints, he went on to play at Auburn University-Montgomery.

Upon graduation from AUM, Dent was hired as the head baseball coach at Coosa Valley Academy, a Class 2A Alabama Independent School Association (AISA) school. Coosa Valley won its state championship this year, giving Dent a good start in the coaching world.

Dent said he fell in love with the area and what really attracted him to the area is its people. They treat you like family, he said.

“But, being back down here and reaching a goal I set in junior college is something special to me,” he said.

Andalusia’s Bulldog squad next year will be loaded chalk-full of an experienced upper class.

One thing the new Bulldogs coach is looking for right now is some leadership out of the group.

“It’s a special group of guys,” Dent said. “They’re not afraid to work. We’re going to have to put it together on the field. Like I tell them, ‘Talk’s cheap, but it’s what you’re going to do in between those white lines (that matters).'”

With only one year of coaching experience under his belt, Dent said his coaching philosophy centers around “respect” and “leadership,” which in turn will help Andalusia in the future.

“I found out you have to give the kids a certain amount of respect to gain the respect for them,” he said. “By all means, I’m going to demand respect, but also I’m going to respect them to a certain extent as well.”

Dent credited Helms for instilling in him a love and respect for the game. He said that’s going to be translated on the field at AHS.

“The main thing I learned from coach Helms is learning to play the game the right way,” he said. “We’re going to do the little things right. We’re going to hustle on and off the field, we’re going to have our shirt tails tucked in and we’re not going to wear our hats backward. We’re going to respect the game. That’s the biggest thing.

Dent will also coach the offensive line for Andalusia’s football team. He was hired as a paraprofessional at AMS, teaching in the special needs classroom.

The purpose of a Black Lantern Power Ring is to bring the dead back to life. Facing a series loss... read more