Something new for Florala? 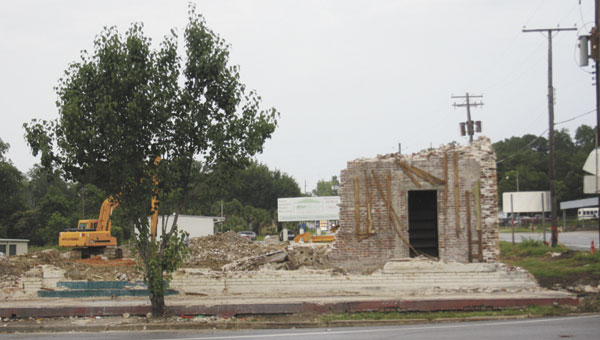 The former Covington Industries building in Florala, a multi-level structure, has been demolished.

Mum is the word when it comes to what will occupy the former Covington Industries site in Florala.

The property, which sits on nearly half a city block, is located at the intersection of Fifth Avenue and U.S. Hwy. 331. For months, residents have watched as the brick buildings were slowly demolished. As of Sunday, the only thing that remained of the building was what appeared to be a corner office. For decades, the site housed thousands of textile workers, but has been vacant for many years.

Bishop has told The Star-News multiple times that he is prohibited from speaking about the project because of a non-disclosure agreement.

Mayor Robert Williamson said Monday he’s only heard rumors of what will become of the corner.

“I have an idea, but I don’t know for sure,” Williamson said. “I spoke with (Bishop) but he told me that he couldn’t talk about the project because of a confidentiality reasons. I told him that I didn’t have to know, just build something.”

Williamson said he hopes the project brings not only jobs, but also revenue for the city.

When posed the question of what’s coming on Facebook, Florala residents had many ideas. The most popular was a bank.

Councilwoman Hazel Lee said, “I’d like to see a company that employs people at a livable wage – one that would employ at least 100 people and something like a company designing and making high tech car parts, airplane parts, space craft components, pharmaceuticals, software, etc.”

Shalona Kilpatrick said, “Anything, because one new place means one step toward rebuilding (the) town.”

Never too young to start work