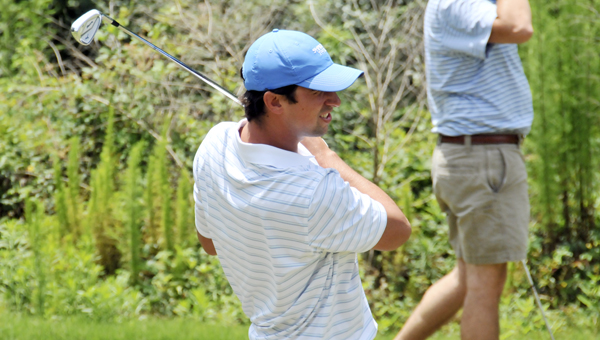 Laughing and joking with other golfers, former University of Alabama quarterback Brodie Croyle made it his game plan to have fun on Monday at Andalusia Country Club.

The former Kansas City Chief QB joined approximately 50 other golfers, who were playing in a 3-person scramble format.

When asked if he plays golf often, Croyle said “not enough to be good.”

“I enjoy getting out and enjoy playing,” he said. “Unfortunately, my game doesn’t reflect my joy of being out here.”

Every now and then, Croyle will appear at an event such as Monday’s.

While at UA from 2002-2005, Croyle was the Crimson Tide’s most prolific passer. He became the second freshman quarterback since 1979 to pass for more than 1,000 yards in a single season with 1,046 yards. He topped that in 2003 for his sophomore season, becoming the first Alabama player in history to pass the 2,000-yard mark in a season. Croyle completed 182 of 341 pass attempts with 16 touchdowns and 13 interceptions.

After getting off to a great start for his junior season in 2004, Croyle suffered a right knee ACL tear during his game against Western Carolina. He bounced back to finish his senior season to own just about every passing and total offense record for the Crimson Tide.

Selected in the third round of the NFL Draft in 2006, the Rainbow City native went to the Kansas City Chiefs.

Croyle had his best season in 2007, when he went 127-of-224 in passing for 1,227 yards and six touchdowns. He went on to play sparingly for the remainder of his short time with the Chiefs.

Croyle retired from the NFL in May 2012 and is currently in the process of moving his family from Tuscaloosa to Gadsden, where he’ll be helping run his father, John’s, ranch. John played for Paul “Bear” Bryant when in college.

When asked what he thinks about the current Crimson Tide program, Croyle had nothing but good things to say about what UA coach Nick Saban has done in the past six years.

“Man, it’s unbelievable what coach Saban and his staff’s done,” he said. “In today’s era of football, to be able to win three out of the last four national championships is obviously a dynasty, and it doesn’t seem like it’s going to slow down anytime soon.

“That’s what makes coach Saban and the program so special,” he said. “There’s no complacency — there’s no resting on laurels. Their goal is still the same. As an ex-player and fan, it’s an honor and privilege to be able to watch it.”

Croyle is married to Kelli, and they have a 2-year-old son, Sawyer.