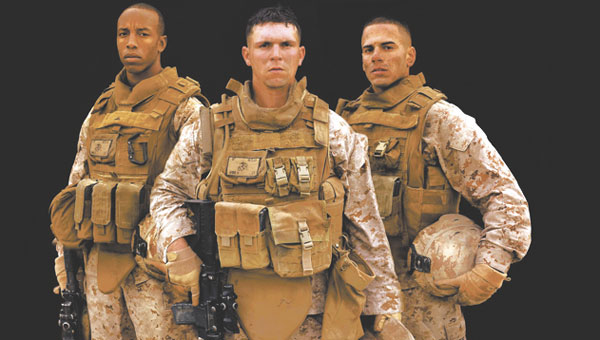 American Apparel, which is headquartered in Selma and has a manufacturing facility in Opp, has gotten a contract to produc combat utilitie uniform blaouses, like those shown above, for the Marines.
Photo courtesy U.S. Marines

Selma-based American Apparel Inc. has been awarded up to $14.9 million through a modified contract with the Defense Logistics Agency for the production of the Marine Corps combat utility uniform blouse, al.com reported late Monday.

Work will be performed in Alabama and Mississippi. In addition to its Selma headquarters, American Apparel has facilities in Centre, Oneonta, Fort Deposit and Opp. The company employs more than 1,330 people and maintains almost 600,000 square feet of capacity.

In late April, Americal Apparel temporarily laid off 225 workers in Opp when it did not get a military contract it was expected.

The company announced in late 2010 that it was awarded three U.S. military contracts to provide uniforms and uniform pieces for troops serving in combat operations.

At the time, the Opp branch added 60 jobs to its workforce, which brought the number to its current 225.

The Marine Corps Combat Utility Uniform or MCCUU is intended for wear in the field or for working parties, but has become the typical working uniform for all deployed and most garrison Marines and Sailors.[3] It is rendered in MARPAT digital camouflage that breaks up the wearer’s shape, and also serves to distinguish Marine uniforms from those of other services.

Jobless rate up slightly, near average

Covington County’s jobless rate increased by half a percentage point in May, but was slightly lower than the same month... read more