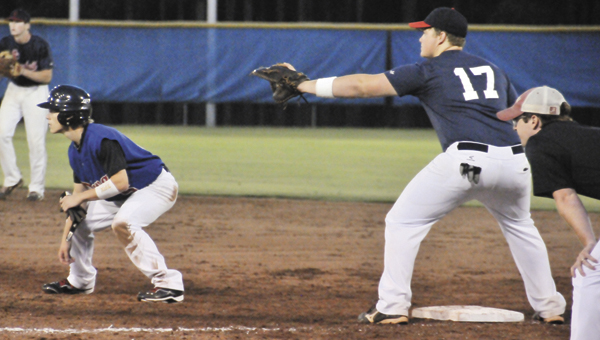 Covington County Blue’s Cody Marler gets ready for a possible throw to first base in an earlier game this season. |
Photos by Andrew Garner/Star-News

It’s safe to say that the Covington Countys Blue Babe Ruth baseball team doesn’t have the “blues” this summer.

Covington County just got back from a weekend tournament down in Ft. Walton Beach, Fla.

CC Blue won three out of four games at the tournament in Florida, McKinney said.

“We’re doing pretty good,” he said. “We’ve been doing well on defense, but in hitting we’ve been struggling a little bit.

“Other than that, we’ve got to hit the ball,” he said. “We did score needed runs at the tournament, but they weren’t enough to win the last game.”

Then on Thursday, the Blue team will travel to play Brewton. CC Red will face Butler on Thursday as well.

They will finish their week on Saturday morning, where Covington County will face Baker, Fla., at LBWCC at 11.

Select players from the Blue and Red teams will participate in the 2013 16-18 Babe Ruth Baseball World Series in August.

The tournament will be held at LBWCC in Andalusia from Aug. 15-22.

The host team will be selected at a later date.

Andalusia and Opp’s 8 and under Cal Ripken All-Stars ended their postseason run in the state tournament on Monday at... read more