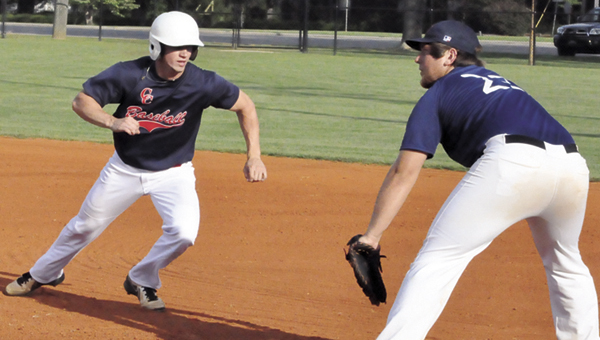 Covington County’s Chase Short gets picked off at first base Thursday night. |
Adam Robinson/For the Star-News

In a Thursday night 16-18 Babe Ruth baseball game between the Brewton Dawgs and Covington County, the two teams split. With the split, Brewton’s record went to 7-7-1.

In game one, Brewton edged out Covington County 6-5, while CC took the nightcap win with a 5-0 victory.

Brewton built a 6-1 lead over Covington County after two innings, and was able to hang on to get a 6-5 win in game one Thursday night.

Tyler Joyner earned the win on the mound for the Dawgs. Tyler Peebles got the save. Joyner went four innings and allowed six hits, four runs, walked one and struck out four. Peebles went one inning and allowed one hit, one run and walked two.

Covington County plated three runs in the fourth and one in the fifth, but Brewton grabbed the win by one.

Covington County’s Jordan Walker went the complete game distance on the mound and allowed three hits, no runs and hit one batter while striking out seven to give CC the split with the Dawgs.

CC scored one run each in the first and third innings and added three in the final frame of the fifth to put the game away and get the five-run win.

For Brewton, Lodge and Mike Williams had a single each at the plate while Carmichael had a double to lead off the fifth inning.

Andalusia 10U, 12U teams win in night caps

Andalusia picked up wins in 10U and 12U softball action tonight in pool play of the Babe Ruth Softball State... read more