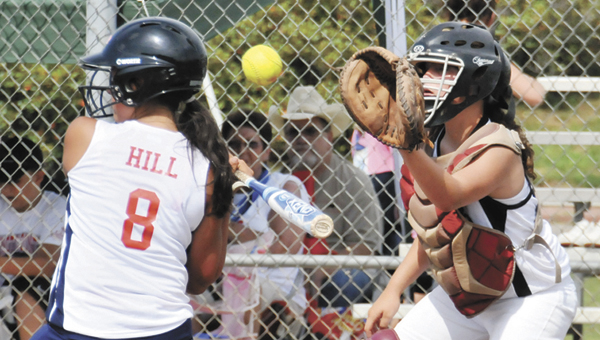 Crumpled tents lay strewn across the Dwight Mikel Sports Complex like dead spiders Friday after a storm blew through the area with high winds, rain and lightning.

The inclement weather stopped play of the Babe Ruth State Softball Tournament for more than three hours, where play resumed at around 5:30 p.m. for the first afternoon games in pool play.

City of Andalusia employees were busy with their squeegees trying to dry the fields as fast as they could to get action going back again.

Before the bottom fell out of the sky, Brewton’s softball teams picked up two wins in pool play at the tournament, where they beat Covington County 12-9 in 8U actoin, and Alexander City 17-15 in 10U action.

In other 8U action, Opp defeated Andalusia 14-7.

Ashlee Findley went 3-for-4 with three singles to lead Covington County, but Brewton scored eight runs in the fourth and fifth innings to come out on top.

Covington County made things interesting with six runs in the fourth inning to take a 9-8 lead.

Stella Gilbreath went 3-for-5 to lead the Lady Bobcats; and Kelsi Cardwell and Caroline Carson went 2-for-4 each.

Andalusia’s Olivia Mikel went 1-for-2, and Catherine Pettie went 1-for-3 for the Lady Bulldogs.

Opp scored four runs in the first inning, and Andalusia countered to make it 4-3 in the bottom half of the frame.

Trailing 14-3, Brewton scored 12 runs in the fourth inning and tacked on one run each in the fifth and sixth for the win.

Alexnder City shot out to a 10-1 lead after the second inning, but fell flat the fourth through the sixth, scoring only three additional runs.

Makenzie Thomas went 1-for-4; and Sarah Scott went 2-for-5 to lead Brewton at the plate.

Tri County scored three runs in the first inning, and added five later in the third to pull away with a 8-3 lead.

Kaile Gumapac went 1-for-2 with a double to lead Flomaton/East Brewton.