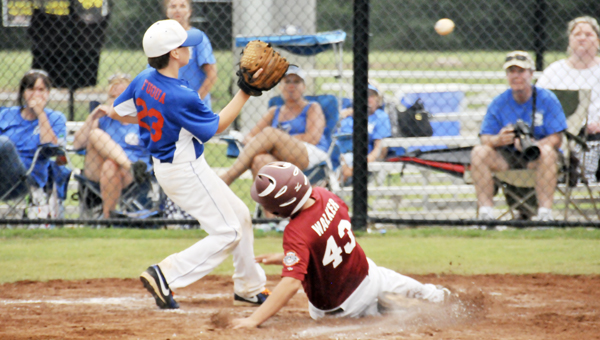 Andalusia’s Jake Walker scores on a passed ball for the Bulldogs’ first run of the game. | Andrew Garner/Star-News

Andalusia trailed Demopolis 4-2 at the start of the sixth inning when lightning stopped play at the 11-to-12-year-old Cal Ripken State Baseball Tournament at Johnson Park tonight.

The Bulldogs got off to a rocky start, allowing Demopolis to score four first-inning runs to get in an early deficit.

Andalusia scored two runs in the top of the fourth inning and both teams were held scoreless in the fifth as dark clouds loomed over Chick Earle Field.

The lightning strike stopped the game at 7:12 p.m., sending both teams running for shelter to beat the impending rain. Tournament officials decided that since it would take a long time to get the field ready for play, it would be in the best interest of the teams to pick up play at 9 a.m. tomorrow to continue pool play action.

Demopolis’ Trey Malone and Hunter Thrash was 1-for-3 each; and Jadien Isaac and Payton Geary was 1-for-2 each when play was called.

Andalusia’s Jacob Cravey was 2-for-3; Sebaskin Stallworth was 2-for-2; and Noah Kelly was 1-for-2.

Stallworth struck out 10 betters in five innings so far in the game.

In the top of the ninth inning, Butler’s Tommy Littlepage and Dae Dae Graham reached on a walk and a hit by pitch, respectively, with two outs. They later scored on a wild pitch to put the game at 4-2.

To score the fifth run, Butler’s Blake Reid scored on another wild pitch.

Covington County scored one run each in the first, third and ninth innings.

At the end of regulation, the game was tied 2-2.

Opp scored four runs in the first two innings and never looked back on its lead.

Covington County didn’t get off to the best of starts in pool play today, losing 19-2 to a good-hitting Childersburg team in the first game.

CC would end up falling 9-3 to Semmes later in the day.

Dale Coleman (double) and Dillon Courson went 1-for-2 each for CC in the loss to Childersburg. Childersburg tallied 16 hits in the win.

Coleman went 1-for-2 with a single; and Brandon Douglas went 1-for-3 in CC’s loss to Semmes.

Covington County will be back in action tomorrow at 10 a.m. against Valley Grande, who lost 11-10 to Childersburg in the final game of pool play today.

Childersburg scored three runs in the bottom of the sixth for the win.

Rabren shoots 2-over in final round

Brooks Rabren took a stray golf ball to the mouth and still shot a 2-over-par 72 in the final round... read more