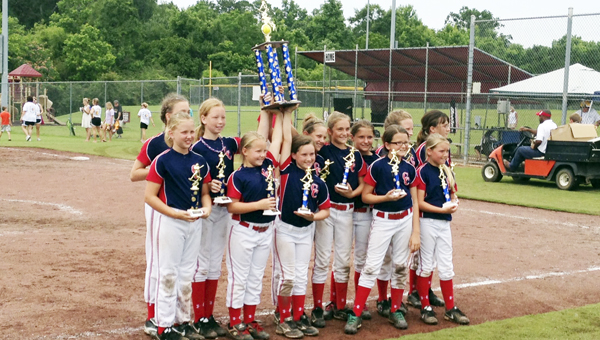 Covington County’s 10U Softball All-Stars hold up their championship trophy this morning at the Dwight Mikel Athletic Complex. | Andrew Garner/Star-News

Covington County recovered from a 4-1 deficit after the second inning and went on to score seven runs in three innings to beat Opp 8-6 for the 10U Babe Ruth State Softball Championship at the Dwight Mikel Athletic Complex Sunday morning.

On the mound, Arnett threw a heck-of-a-game, striking out 12 batters in the complete game. She allowed six runs on multiple hits.

Covington County and Opp (with the runner up finish) qualify for the 10U Southeast Regional Babe Ruth Softball Tournament in Glen Allen, Va., in the middle of next month.

The Star-News will update its readers on whether or not either team will be going to the regional tournament.

Andy falls in 8U, 12U softball title games

Andalusia’s 8U and 12U Babe Ruth Softball All-Stars fell in their respective championship games today in state tournament action at... read more